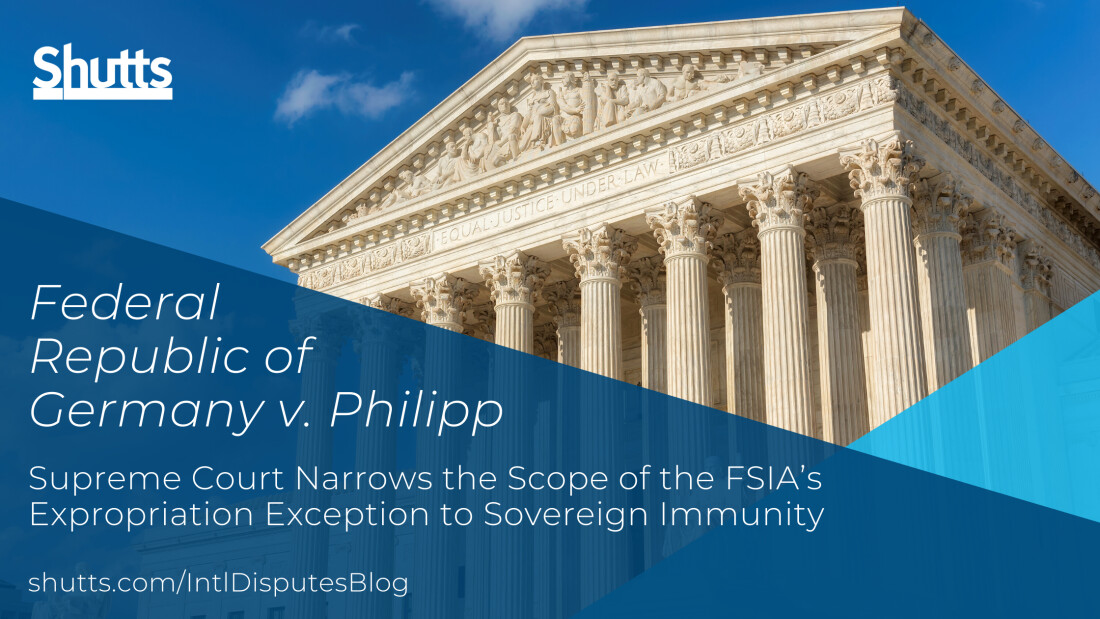 Last month, in Federal Republic of Germany v. Philipp, 141 S. Ct. 703 (2021), the United States Supreme Court revisited and narrowed the scope of the expropriation exception to sovereign immunity set forth in the Foreign Sovereign Immunities Act (“FSIA”). Under the FSIA, foreign sovereign nations, as well as their political subdivisions and agencies and instrumentalities, are presumed to be immune from suit in U.S. courts, with a limited number of exceptions.

Under the FSIA, courts may find that foreign states are not immune from litigation in U.S. courts under any one of the following scenarios:

At issue in Philipp was the expropriation exception to the FSIA, which grants U.S. courts jurisdiction over foreign sovereign states in cases “in which rights in property taken in violation of international law are at issue.” 28 U.S.C. §1605(a)(3). The Philipp case involved the claims of heirs of German Jewish art dealers against the Federal Republic of Germany and an instrumentality of Germany. The heirs alleged that, as part of the Nazi genocide, the Nazi government had coerced the German Jewish art dealers to sell their art collection of medieval relics to Prussia for a fraction of its value. Today, the art collection is displayed in a museum in Berlin and is owned by Stiftung Preussischer Kulturbesitz (“SPK”), which is the instrumentality of Germany sued in this case.

Germany and SPK (collectively referred to as Germany) moved to dismiss the claims under the FSIA, arguing that the heirs' claims did not fall within the expropriation exception to sovereign immunity for “property taken in violation of international law.” The district court sitting in the District of Columbia denied Germany’s motion to dismiss and the D.C. Circuit affirmed, finding that although the domestic takings rule mandates that a foreign sovereign’s taking of the property of its own nationals is not a violation of international law, which is required for application of the expropriation exception to immunity, the forced art sale resulted from the Nazi genocide, which is a violation of international law under the FSIA.

The Supreme Court did not address Germany’s argument on whether U.S. courts should avoid deciding this case on international comity grounds.

By refusing “to subject all manner of sovereign public acts to judicial scrutiny under the FSIA by transforming the expropriation exception into an all-purpose jurisdictional hook for adjudicating human rights violations,”  the Supreme Court has significantly narrowed the scope of the expropriation clause of the FSIA to include only cases involving violations of international rights of property, and excluding violations of other types of international law—including international human rights law. It remains to be seen whether other forums will provide remedies for litigants seeking to recover property that has been expropriated by foreign governments.