International Investment and Commercial Arbitration: Not a Spectator Sport
8.21.20 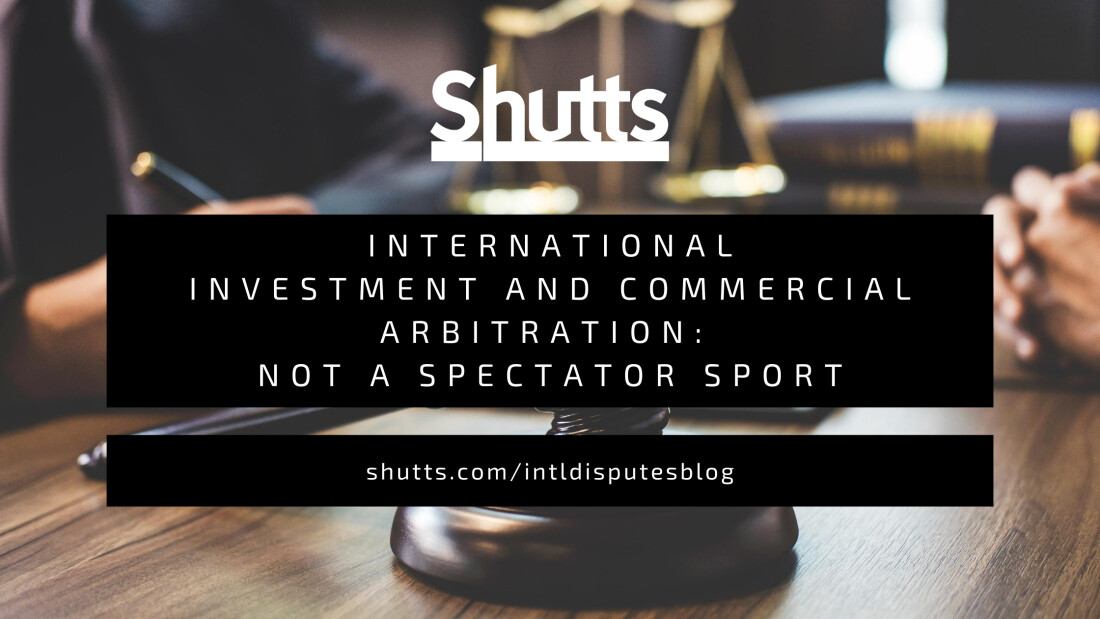 One of the main procedural cornerstones of international investment and commercial arbitration is arbitral tribunal integrity. Accordingly, attacks on the composition of the tribunal can be fatal. In fact, international conventions and institutional arbitration rules recognize improper arbitral tribunal composition as one of the few reasons for annulment or setting aside of the award, or for non-recognition and non-enforcement of the award. Therefore, properly and fully vetting your preferred arbitrators prior to their appointment, and perhaps even throughout the pendency of the arbitration proceeding, is paramount.

At the heart of international arbitration, much like litigation, lies general principles of fairness, impartiality, and independence. Fortunately, organizations such as the International Bar Association (“IBA”) have proffered widely used guidelines to facilitate the assessment by arbitrators and parties of potential conflicts of interest that require disclosure or denegation of an appointment. The IBA Guidelines on Conflicts of Interest in International Arbitration were approved in May 2004, and later revised in October 2014 (the “Guidelines”).  The Guidelines are organized into two parts: part one addresses general standards concerning impartiality, independence, and disclosure; and part two illustrates the practical application of the general standards. Importantly, the Guidelines apply to arbitrators, administrative secretaries and assistants.

This commentary posits that awareness and implementation of best practices, as established by the Guidelines, are essential to avoid fatal attacks on an arbitral award. More specifically, the Guidelines consist of a traffic light color-coded list that provides non-exhaustive examples of potential conflicts in international arbitration. Relationships or situations under the “red” list signify serious conflicts of interest which result in inability to accept an appointment and/or require strict disclosure requirements and express waivers by the parties. Conversely, situations under the “green” list rarely mandate disclosure.

The best part about the Guidelines? They address common situations that we, as practitioners, face daily. Essentially, the Guidelines warn that, when in doubt, one should err on the side of disclosure. Doing just that may have prevented the ultimate annulment of an international arbitral award for claimant investors in a case against the Kingdom of Spain.

In May 2017, in Eiser Infrastructure Ltd. et al. v. Kingdom of Spain, an International Centre for Settlement of Investment Disputes (“ICSID”) ad hoc tribunal issued an arbitral award against Spain and in favor of the claimant investors (“Claimants”) of over $140,000,000 in damages, coupled with interest (“Award”). The Award rested on a finding that Spain wrongfully revoked the renewable energy investors’ subsidies and financial inducements under Spain’s legislation enacted in 2007. In 2012, under a new administration, Spain became considerably less supportive of concentrated solar power programs and changed its position on the matter. The award was based on the tribunal’s finding that Spain had violated the Energy Charter Treaty (“Treaty”). This Treaty violation, the tribunal reasoned, qualified as a violation of Spain’s obligation to afford fair and equitable treatment to Claimants as investors, depriving them of the value of their investment.

In June 2020, an ICSID committee (“Committee”) rendered its response to Spain’s petition for annulment of the award (“Annulment Petition”) and unanimously annulled the Award, concluding that the Claimants’ appointed arbitrator (“Arbitrator”) had a conflict of interest. Specifically, the Committee found that the Arbitrator’s undisclosed business relationship with Claimants’ damages expert had been improper due to the perceived lack of impartiality and independence of the Arbitrator, which created a “manifest appearance of bias.” To be clear, this relationship was enough to successfully attack the propriety of the composition of the arbitral tribunal and the departure from procedural fairness. Notably, annulment committees have been following a recent practice of awarding costs to the prevailing party. In Eiser, the Committee did just that and ordered Claimants to pay for the fees and expenses of the members of the Committee; the charges for the use of the ICSID facilities; and the fees and expenses incurred by Spain concerning the annulment proceeding. For further perspective, Claimants were ordered to pay over $500,000 in costs and over $3,000,0000 for Spain’s legal fees and expenses.

In its Annulment Petition, Spain succinctly argued that no reasonable third-party observer would conclude that the Arbitrator would exercise impartial and unbiased judgment regarding the expert reports and testimony presented by Claimants’ expert, an employee of The Brattle Group (“Brattle”) due to (i) the close relationship between the Arbitrator and a law firm with a relationship to Brattle, for which the Arbitrator had worked as head of the international dispute resolution group, (ii) the relationship between Claimant’s damages expert and Brattle; and (iii) the Arbitrator’s failure to disclose these relationships in the ongoing arbitration. Because the continuing obligation to disclose cannot be construed narrowly in favor of arbitrators, Spain argued it had to be approached from the point of view of a party. And, as the Committee conclusively found: “[i]t matters not that [the Arbitrator] may not even have been conscious of the insidious effects of his association. What matters is that an independent observer, on an objective assessment of all the facts, would conclude that there was a manifest appearance of bias on the part of [the Arbitrator].”

Interestingly, the Arbitrator’s business relationship to Brattle, a U.S.-based consulting firm that offers damages expert testimony in legal proceedings, had previously served as the grounds for a challenge to the Arbitrator’s appointment in an unrelated arbitration involving Pakistan. While that petition ultimately failed, such a result did not preclude Pakistan from reasserting its argument at a much later procedural juncture. In that ICSID case, Tethyan Copper Company Pty Ltd. v. Islamic Republic of Pakistan, Pakistan has since petitioned for an annulment of a $5.9 billion award, identifying as grounds for the annulment, among other things, the Arbitrator’s relationship with Brattle.

The takeaway? Adhering to the Guidelines and observing disclosure best practices could have prevented the annulment of the arbitral award in the Eiser case. The Guidelines are hardly new to the practice of international arbitration and a significant number of arbitral cases and arbitral awards cite them as persuasive secondary authority. As counsel, one must not lose sight of the sanctity of arbitral tribunal integrity and one’s role in procuring a proceeding that is perceived as fair to both parties by a third-party observer.