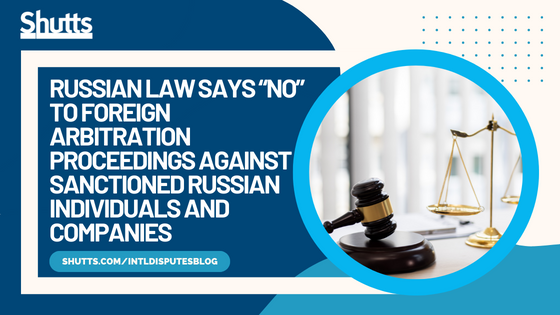 On June 8, 2020, Russia enacted Federal Law No. 171-FZ1[1] (the “Law on Protection from Sanctions”).[2] Under this new statute, a person or entity that is the subject of Russian sanctions can apply to a Russian court for an anti-suit injunction prohibiting the claimant from initiating or continuing litigation or arbitration in a foreign court or international arbitration.[3] If the claimant refuses to cease the international proceedings in violation of the Russian court’s anti-suit injunction, the Russian court can award the sanctioned person with a sum equivalent to the international award against the sanctioned person (thereby, in effect, eliminating the award against the sanctioned person).[4] The amount cannot exceed the amount sought by claimant plus legal costs.[5] Can a Russian party, facing international sanctions, defeat the rights of the adverse party to a damages award and undermine an agreement to be bound by an international dispute resolution clause? Russia says: YES.

Let us look at how the Russian Supreme Court recently interpreted this law. In JSC Uraltransmash v. PESA (cases No. А60-62910/2018 and А60-36897/2020), the Russian Supreme Court confirmed that this law will be interpreted broadly, to cover all sanctioned parties, without any requirement for the sanctioned party to show it was denied due process or access to justice. The party applying to the Russian court for an anti-suit injunction will just have to show that it was the subject of sanctions.

However, the Russian Supreme Court also ruled that the location of claimant and location of arbitration in sanctioning states played a factor in determining whether sanctioned respondent’s due process rights were violated (e.g. if the arbitration was being held in a country that imposed sanctions on Russia, this was would support due process rights being violated). Moreover, in order to reap the rewards of this novel new rule, the claimant would have to take steps to enforce the anti-suit injunction and seek the termination of the international proceedings. Russia proposes that the parties could proceed to litigate its rights in Russian courts.

So what does this mean for claimants who seek relief against sanctioned parties? Tread carefully. If you commence an arbitration or litigation against a party subject to the sanctions against Russia, the respondent may very well go to court in Russia to try to get an anti-suit injunction. You may try to oppose the petition for anti-suit injunction (in Russia), or it may be possible to initiate a claim for ultimate relief (in Russia) – but it is not clear such foreign claimants would receive a fair shake in Russian courts. Also consider whether your dispute resolution clause calls for arbitration or litigation within Russia – the Supreme Court’s Uraltransmash decision does not appear to affect arbitration agreements that refer disputes to Russian arbitral institutions (or courts).

Ultimately, no party wants to go through the trouble and expense of an arbitration only to receive an award that cannot be enforced. If a sanctioned party obtains an injunction in Russia, the claimant in whose favor the foreign arbitral award/judgment is rendered may bear the risk of violating the Russian court order and, among other things, the risk that it could be ordered to pay an amount equal to the judgment/arbitral award – at least in those jurisdictions that recognize Russian court judgments.

Consider these issues when drafting arbitration clauses. It is unclear whether parties would be able to draft around Russia’s Law on Protection from Sanctions, or whether Russian courts would find these rights to be non-waivable. Parties to arbitration agreements typically have broad ability to waive their rights (parties can affirmatively waive sovereign immunity protection for example). However, this unique Russian anti-sanction law is new and the case law is undeveloped. As a result, it is important for you to factor this into the drafting of arbitration provisions where it is expected that Russian sanctions issues can be implicated. In addition, be aware that arbitrating against a sanctioned party may result in an anti-suit injunction from a Russian court ordering the foreign proceedings to stop.

[1] Federal Law No. 171-FZ On the Incorporation of Amendments to the Arbitrazh Procedure Code of the Russian Federation in Order to Protect the Rights of Natural Persons and Legal Entities in Connection with Restrictive Measures Imposed by a Foreign State, an Association and/or Union of States, and/or a Governmental (Intergovernmental) Institution of a Foreign State or Association and/or Union of States, dated 8 June 2020.