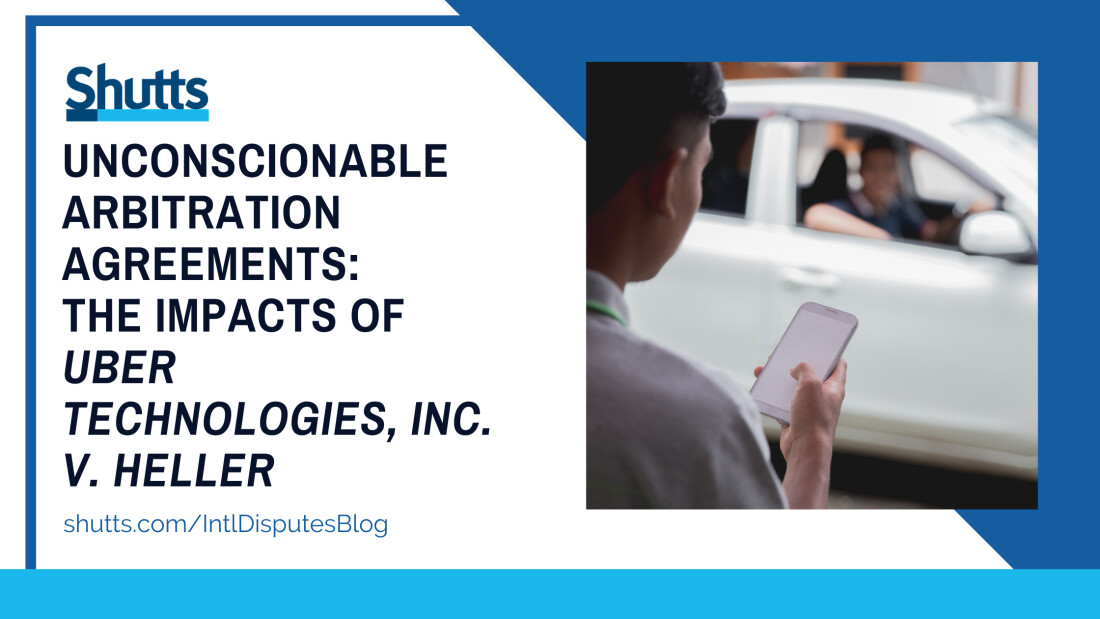 In a recently published ruling, the Supreme Court of Canada analyzed and interpreted the validity of an arbitration agreement signed between Uber Technologies Inc. (“Uber”) and one of its drivers.

Uber Technologies, Inc. v. Heller[1] arises from a class action started by Heller before the Superior Court of Ontario. Heller, a driver who provided food delivery services in Toronto using Uber’s applications, claimed Uber was in violation of applicable employment laws. In order to be registered with the Uber applications, Heller had to accept Uber’s terms of service as did all other drivers of the company, which contained a dispute resolution clause with an arbitration agreement providing for mediation and arbitration to be conducted under the International Chamber of Commerce (“ICC”) Rules, in Amsterdam, Netherlands, and for Dutch Law to be applied.

The Supreme Court of Canada confirmed the decision of the Court of Appeals under the same finding that the arbitration agreement was unconscionable. The Court found that even if the Heller had indeed read the whole contract, he was “not in a position to understand the financial and legal implications of agreeing to arbitrate under ICC Rules or under Dutch Law.” The Court found that the burden that Heller had to bear in order to have an arbitrator analyze his arguments outweighed the principle of competence-competence in this specific case, noting:

The mediation and arbitration processes require US$14,500 in up-front administrative fees. This amount is close to Mr. Heller’s annual income and does not include the potential costs of travel, accommodation, legal representation or lost wages. The costs are disproportionate to the size of an arbitration award that could reasonably have been foreseen when the contract was entered into … Any representations to the arbitrator, including about the location of the hearing, can only be made after the fees have been paid.

This decision by the Canadian Supreme Court discusses issues of great importance to arbitration practitioners and users who assent to terms of use provisions:

On the one hand, the decision touches on a very critical and fundamental concept of International Arbitration, which is the principle of competence-competence, meaning that the arbitral tribunal has jurisdiction to rule on the extent of its competence to hear a dispute in light of the arbitration agreement at issue. The fact that a court found the arbitration agreement invalid for being unconscionable before an arbitral tribunal has had the opportunity to review the jurisdictional issue raises strong concerns to the arbitral community, as the decision disregards this root principle that a tribunal may determine its own competence. The ICC, acting as amicus curiae in the case and arguing against the appellate court’s decision to invalidate the agreement, argued that the principle of competence-competence is one of the fundamental pillars of international arbitration, and that arbitration relies on harmonized interpretation and application of such principles by national courts. Furthermore, the ICC has also given insights into the cost-effectiveness of its proceedings, its fitness to a wide range of disputes, and the possibility to have remote proceedings with controllable costs.

On the other hand, the decision in Uber v. Heller might impact many users of arbitration and future interpretation of arbitration agreements that are inserted in adhesion contracts, especially where acceptance of terms and conditions is given online by checking a box or consenting to a pop-up. In such cases, the cost of starting an arbitration might be indeed disproportionate to the size and complexity of the dispute, which could serve as a barrier to individuals with claims against the companies that require this type of consent. As the Canadian Court noted, “[r]espect for arbitration is based on it being a cost-effective and efficient method of resolving disputes. When arbitration is realistically unattainable, it amounts to no dispute resolution mechanism at all.”

This decision runs counter to similar cases in U.S. courts, which have upheld agreements to arbitrate in similar terms of use provisions upon a finding that users affirmatively agreed to, and had notice of, the terms of use, and that the arbitration agreements are neither procedurally nor substantively unconscionable.[2]  In such a case, it is up to the arbitral tribunal to determine whether a dispute is covered under the agreement.

Further application of the decision in Uber v. Heller is yet to be seen, but as an immediate impact, the case emphasizes the importance of making informed decisions on the dispute resolution methods governing contracts. Clients seeking to resolve disputes by arbitration should analyze the circumstances surrounding the agreement to arbitrate, including opposing party’s expertise and form to which consent to the agreement to arbitrate was given.