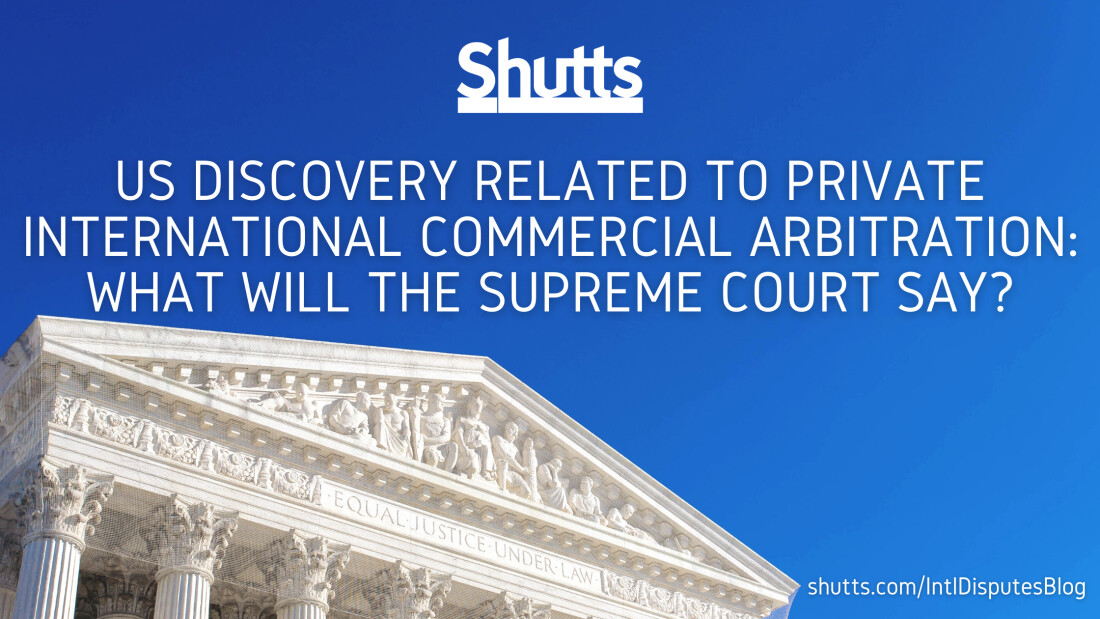 Seeking discovery in the United States in aid of a proceeding before a foreign or international tribunal is a useful and unique tool available under 28 U.S.C. § 1782. This statute provides that any “interested person” may make an application to a district court where the person from whom discovery is sought “resides or is found” and that the court may direct that person to produce documents or provide testimony. This statute is rooted in an 1855 statute that provided federal courts with the authority to assist foreign courts. Section 1782 was then enacted in 1948, with Congress completely revising the statute in 1964. A large body of case law has developed over Section 1782, with interpretations as to what it means to be an “interested person,” what it means to “reside[] or [be] found,” and what “foreign or international tribunal” means. While a significant number of district and appellate court decisions exist, the Supreme Court has only rendered one decision concerning the scope of Section 1782, in Intel Corp. v. Advanced Micro Devices, Inc., 542 U.S. 241 (2004), in a 7-1 decision with the late Justice Ginsburg delivering the opinion of the Court. In Intel Corp., the Court held that the use of Section 1782 is permissible to seek discovery related to a proceeding that is reasonably contemplated. Further, the Court set forth several discretionary factors in addition to the threshold statutory requirements that courts are to consider when determining whether to grant an application made under Section 1782.

Intel Corp. may soon have a companion opinion from the Supreme Court concerning Section 1782. On March 22, 2021, the Court granted a petition for certiorari in the case of Servotronics Inc. v. Rolls-Royce PLC, a decision from the Seventh Circuit Court of Appeals. 975 F.3d 689 (7th Cir. 2020), cert. granted, No. 20-794, 2021 WL 1072280 (U.S. Mar. 22, 2021). The issue for the Court to decide is whether the discretion granted to district courts in Section 1782 to render assistance in gathering evidence for use in “a foreign or international tribunal” encompasses private commercial arbitral tribunals. Servotronics is on track to resolve a circuit split that has developed over time concerning the extension of Section 1782 to private international commercial arbitration proceedings.

The Sixth Circuit and then the Fourth Circuit revived this discussion and broadened the split of opinion, each holding that Section 1782 was available for use in connection with a private international arbitration proceeding. See Abdul Latif Jameel Transp. Co. v. FedEx Corp. (In re Application to Obtain Discovery for Use in Foreign Proceedings), 939 F.3d 710, 714 (6th Cir. 2019); Servotronics, Inc. v. Boeing Co., 954 F.3d 209, 214 (4th Cir. 2020).

In Servotronics, the Seventh Circuit most recently aligned itself with the Second and Fifth Circuits, concluding that discovery in aid of a private international commercial arbitration is not available. In that case, the arbitration at issue was a proceeding in Birmingham, England, under the rules of the Chartered Institute of Arbitrators (“CIArb”). Notably, the Seventh Circuit found the applicant was not entitled to seek discovery related to the same arbitration in which the Fourth Circuit opined that the applicant was, in fact, entitled to the discovery in its opinion handed down just months before the Seventh Circuit’s decision. See Servotronics, Inc. v. Boeing Co., 954 F.3d 209, 214 (4th Cir. 2020).

While the Eleventh Circuit has declined to join in the circuit split, its potential position regarding the availability of Section 1782 lies in a footnote from a 2014 decision, in which the court noted that the Intel decision does suggest that “tribunal” within the meaning of the statute includes “arbitral tribunals.” Application of Consorcio Ecuatoriano de Telecomunicaciones S.A. v. JAS Forwarding (USA), Inc., 747 F.3d 1262, 1270 n.4 (11th Cir. 2014).

Having the Supreme Court opine on this issue stands to dramatically affect the scope of discovery in aid of private international arbitration proceedings—either it is available, or it is not. In the meantime, depending on where cases are filed, it may be possible to obtain discovery in aid of an ongoing, or contemplated, arbitration. Litigants may wish to consider whether to use this powerful tool to gain strategic advantages in aid of arbitration proceedings.