What do you do if your international legal problems are not only cross-border, but are literally, “out of this world”? Go to Space Court, where the Judges will speak your language.
2.1.21 | Aleksey Shtivelman 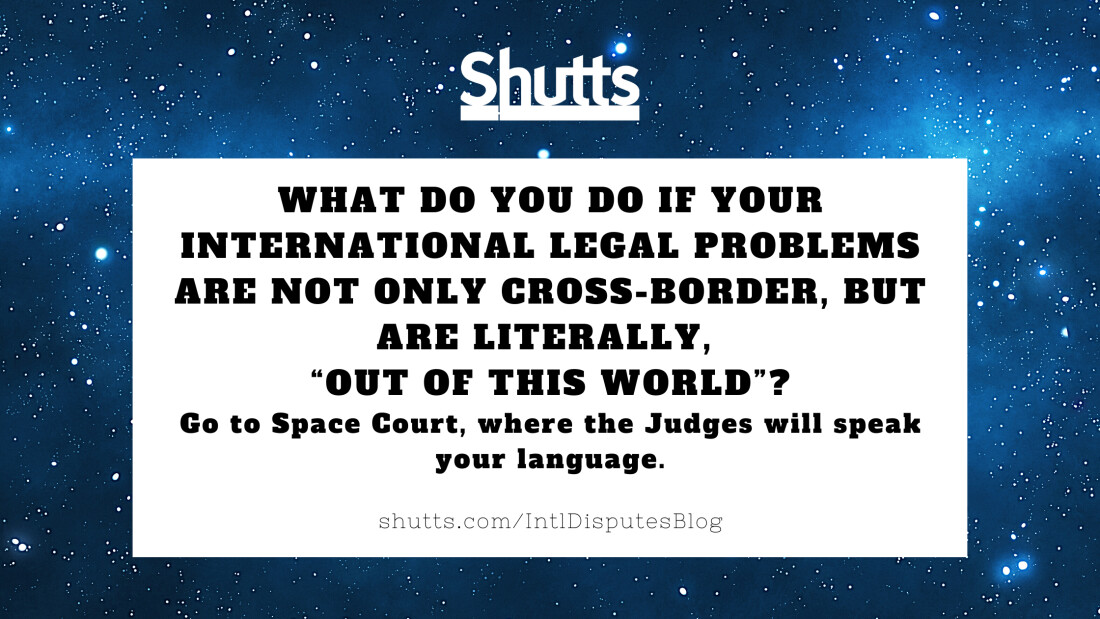 Earlier today, The Dubai International Financial Centre Courts (DIFC) and Dubai Future Foundation announced the creation of a “Space Court” to provide legal solutions in commercial-related space disputes. As space becomes more commercialized and globalized, it will be increasingly important to be able to rely on a venue for resolving disputes involving complex commercial agreements, and multiple treaties governing space law. The Space Court would resolve disagreements over satellite purchases, rocket launches, and disputes regarding collisions between devices in space. The Space Court will be unique because the Judges will be trained to qualify as experts in space legal disputes and applicable law.

Space law is governed by international conventions and resolutions, including the U.N. Outer Space Treaty of 1967, and other bilateral or multilateral agreements, such as the 1972 Convention on International Liability for Damage Caused by Space Objects (Liability Convention), the 1976 Convention of Registration of Objects Launched Into Outer Space, 1976 (Registration Convention). While the other space treaties build and expand upon certain elements of it, the Outer Space Treaty remains the central body of law regarding space law (despite having been executed over 50 years ago when space use was at its infancy).  Critically, only the Liability Convention discusses a dispute resolution mechanism—and even then, the method it proposes is non-binding.

Until recently, the field was almost exclusively dominated by countries and large institutions. However, in recent years, space has become a commercial issue, involving more and more private companies. Because these are often cross-border disputes, they are frequently resolved through arbitration or a designated venue. However, prior to the recent addition of the “Space Court,” the only other dedicated venue for resolving disputes related to incidents in outer space, was the Société Française de Droit Aérien et Spatial (SFDAS) based in Paris. The SDFAS was established in 1994 and aims to provide a speedy and economic settlement of any disputes related directly or indirectly to air and space activities.

As the list of private companies involved in spaceflight continues to grow, and with the expensive nature of the equipment and projects involved in space-related activities, Dubai has apparently sought to capitalize on the lack of an established venue for settling these international disputes. The global space industry is expected to generate revenue of more than $1 trillion or more in 2040, up from $350 billion, currently. As a result, the use of space for commercial purposes is no longer a matter of science fiction. Private companies are fervently competing for use of their services and space vehicles in the transportation and telecommunication markets. Expectedly, this results in multi-million-dollar disputes which must be resolved under applicable international laws, to be litigated or arbitrated, at one venue or another.

Now with the emergence of the Space Court, it remains to be seen whether companies and nations alike will ground themselves at this new venue for resolving their other-worldly international law disputes.