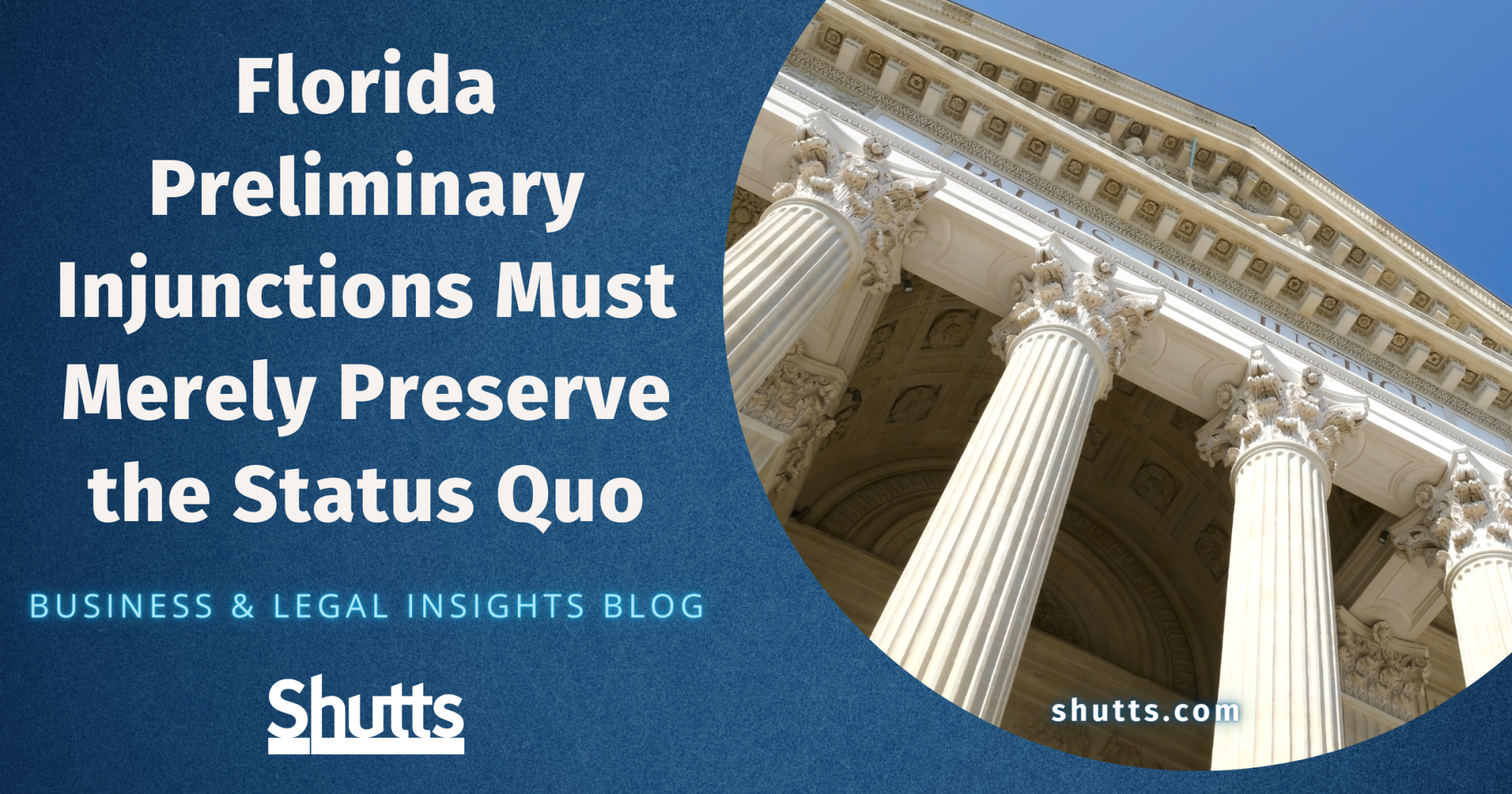 In a recent case, Florida’s Second District Court of Appeal offered a reminder that the fundamental—and limited—purpose of a preliminary injunction is to maintain the status quo.

In the context of a dispute between commercial property owners and their property management company, the appellate court ruled that a preliminary injunction was not the proper procedural vehicle for obtaining expedited relief regarding the property manager’s alleged failure to prepare and provide a final accounting and other documentation following termination of the management agreement. See Gulf Coast Commercial, LLC v. KOS Corp., --- So. 3d ---, Case No. 2D22-464 (Nov. 30, 2022).

In Gulf Coast, the property manager terminated its management agreement due to an alleged failure by the owners to pay management fees. Id. at 1. The owners asserted claims for breach of contract and breach of fiduciary duty, and sought both injunctive relief and damages. Id. The owners filed a motion for preliminary injunction seeking to compel the manager to provide a final accounting and related documentation. Id. at 2. The trial court granted the motion, but the appellate court reversed.

As its rationale for the reversal, the appellate court explained that “[t]he general function of a temporary injunction is to preserve the status quo for disputing parties until the court is able to resolve the underlying dispute on its merits” and that “[t]he status quo is the last, actual, peaceable, noncontested condition which preceded the pending controversy.” Id. (internal citations and quotations omitted).

And, because the purpose of a preliminary injunction is limited to preserving the then-existing status quo, rather than awarding relief that would compel the defendant to affirmatively change the status quo, “[a] preliminary injunction is improperly entered when it bypasses the procedures for a permanent injunction and preliminarily grants the same relief that would have been given in a final order of permanent injunction.”  Id. (internal citations and quotations omitted).  The appellate court further explained:

The Property Owners argue that the trial court’s order preserves the status quo—that is, the last peaceable, noncontested condition before the parties’ current dispute—by requiring Hybridge to provide the final accounting and business records which are critical for the Property Owners to run their businesses. Although the trial court’s order arguably could have preserved some incidental aspect of the status quo by allowing the Property Owners to continue to conduct their affairs, it does not preserve the last peaceable, noncontested status quo because the Property Owners’ assertion that Hybridge has an obligation to perform the accounting is precisely what Hybridge contests in the lawsuit. In other words, the current dispute in the litigation is whether Hybridge has a contractual obligation to do the thing ordered in the temporary injunction.

Hybridge did not recently begin doing something the Property Owners insist it should be enjoined from doing to limit further damage—i.e., a request to restore the status quo to a point in time before the allegedly deleterious behavior of the respondent began. Rather, Hybridge has been refraining from doing something that Property Owners insist Hybridge should have been doing. The Property Owners’ “former condition” would not be restored by the trial court ordering an accounting that Hybridge contends it is under no obligation to perform. The ultimate merits in this case are whether Hybridge is still required to provide an accounting despite the Property Owners’ allegedly anticipatory breach by failing to pay management fees.  By granting the injunction, the trial court did “act[ ] with[ ] regard to the ultimate merits of the controversy …”. Therefore, the trial court abused its discretion by granting the temporary injunction.

The motto of this story: Although it is very tempting for a plaintiff to seek expedited preliminary injunctive relief in an effort to quickly right an alleged wrong, it is critical to evaluate whether the injunctive relief sought will truly be limited to preserving the status quo that existed just before the subject dispute arose. If the injunctive relief sought will require the Court to compel the defendant to affirmatively do something it has refused to do (e.g., prepare a final accounting), that is a sign that Florida courts may consider the requested relief beyond the proper limited scope of a preliminary injunction.