No, A Perpetually-Unfair Commission-Splitting Agreement Is Not A Restraint Of Trade
12.29.21 | Matthew J. Meyer 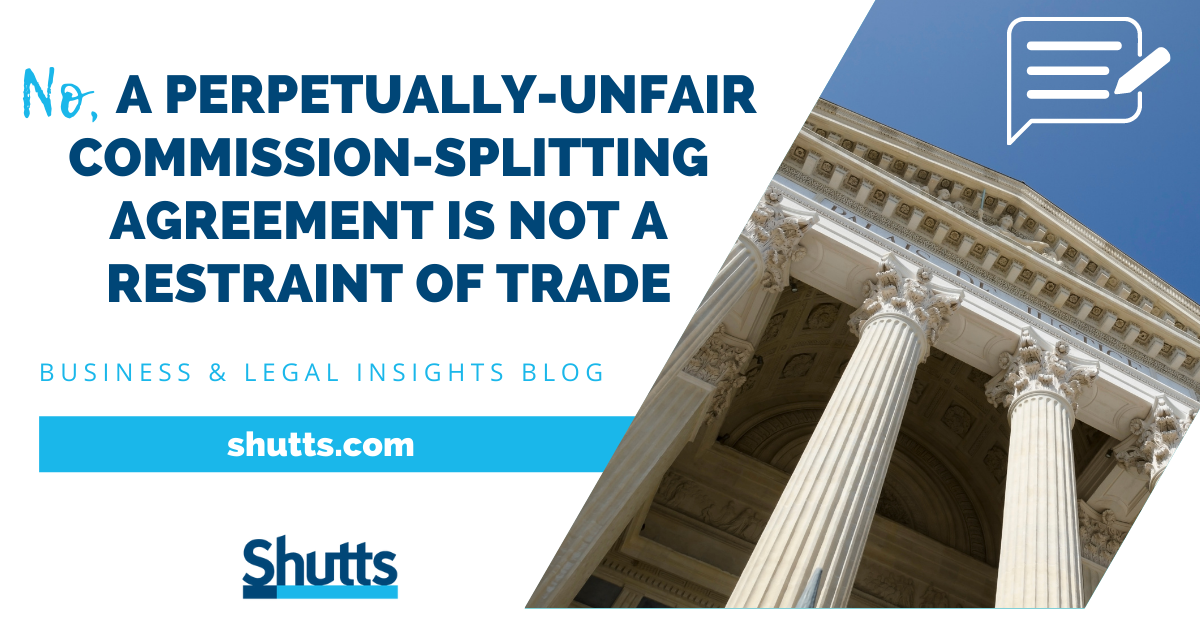 In a recent case that is interesting reading for both antitrust lawyers and insurance agents, which probably does not happen often, Florida’s Second District Court of Appeal (“Second DCA”) held that a commission-splitting agreement—even a very lopsided one—should not be analyzed under Florida’s restrictive covenant statute (Fla. Stat. § 542.335) because such an agreement is not a “restraint of trade” under Florida law.  Capital Wealth Advisors, LLC v. Capital Wealth Advisors, Inc., --- So. 3d ---, Case No. 2D20-2446 (Fla. 2d DCA Oct. 21, 2021).

The written opinion by the Second DCA is most interesting for what it does not discuss, given the facts outlined in the opinion, which are the following:

Id. at 1.  Thus, one reading the facts thinks that, for sure, this opinion will address an argument by the litigants regarding the enforceability of a perpetual contract.  But, instead, the opinion explains why the trial court was incorrect to conclude that the perpetual contract is unenforceable as a restraint of trade.

The Second DCA began its analysis with the fundamental question of what constitutes a “restraint of trade,” given that one need not reach the question of compliance with Fla. Stat. § 542.335 unless the matter presented is actually a trade restraint.  The opinion explained:

However, we need not reach the reasonableness of the scope of the Agreement or whether it is necessary to protect a legitimate business interest under section 542.335 unless and until we determine that the commission sharing arrangement is, in fact, a restraint on trade or commerce under section 542.18.

Section 542.18 provides that “[e]very contract, combination, or conspiracy in restraint of trade or commerce in this state is unlawful.” The Company argues that, because the Agreement imposes a “substantial financial disincentive” on the Company, it constitutes a “restraint of trade or commerce” as that phrase is used in the statute. However, by the Appellees’ rationale, every referral arrangement, fee-splitting deal, or commission structure would constitute a restraint of trade governed by the statute—because each of these creates a disincentive, substantial or otherwise, to the individual or entity that enters into them. For example, a real estate agent might be less motivated to get up off the couch on a Saturday afternoon to show a home to a potential buyer if that buyer was referred pursuant to an agreement under which the agent must pay the referrer a percentage of whatever fee she might be paid upon a sale. But that alone does not transform the referral arrangement into a restraint on trade.

Thus, although this commission-splitting agreement was a bad deal for one of the parties, that did not render the deal unenforceable as a restraint on trade.  The Second DCA continued with its analysis:

The Company describes how good a deal this is for the Agent, and how correspondingly severe the effects of the deal have been to the Appellees. The Agreement might very well have been—or became, in light of circumstances developed after its execution—quite advantageous to the Agent and disadvantageous to the Company and Individuals. This does not make it a restraint of trade or commerce.

And just as the focus on the lopsidedness or open-endedness of the particular deal into which the Appellees entered gets the cart before the horse, so does a premature examination of the geographical or durational scope of the Agreement elide the threshold determination of whether it is a restraint on trade to begin with. While the Agreement might now be financially unfavorable to the Appellees due to the size of the list of referral sources and the enduring obligation to share commissions earned from prior introductions, that is the deal that was struck and under which the Appellees operated for some time. And it does not restrain trade or commerce in the insurance sales market. The Agreement merely requires the Company to split commissions; it does not even operate as a barrier to the Agent’s ability to sell its own insurance products to potential buyers, including to clients of the referral sources listed on Exhibit B. The Agreement does not negatively affect consumers’ ability to procure insurance products since both the Company and Agent can freely compete for the same business.

The mottos of this story: (i) a commission-splitting agreement should not be evaluated as a restraint of trade; (ii) a bad deal—even a bad deal in perpetuity—without more does not render the deal subject to antitrust scrutiny; and (iii) only restrictive covenants that restrain trade—not all “restrictive” covenants—are subject to the statutory limitations and requirements set forth in Fla. Stat. § 542.335.