You Can’t Run From That Arbitration Covenant Running With The Land
2.8.22 | Matthew J. Meyer 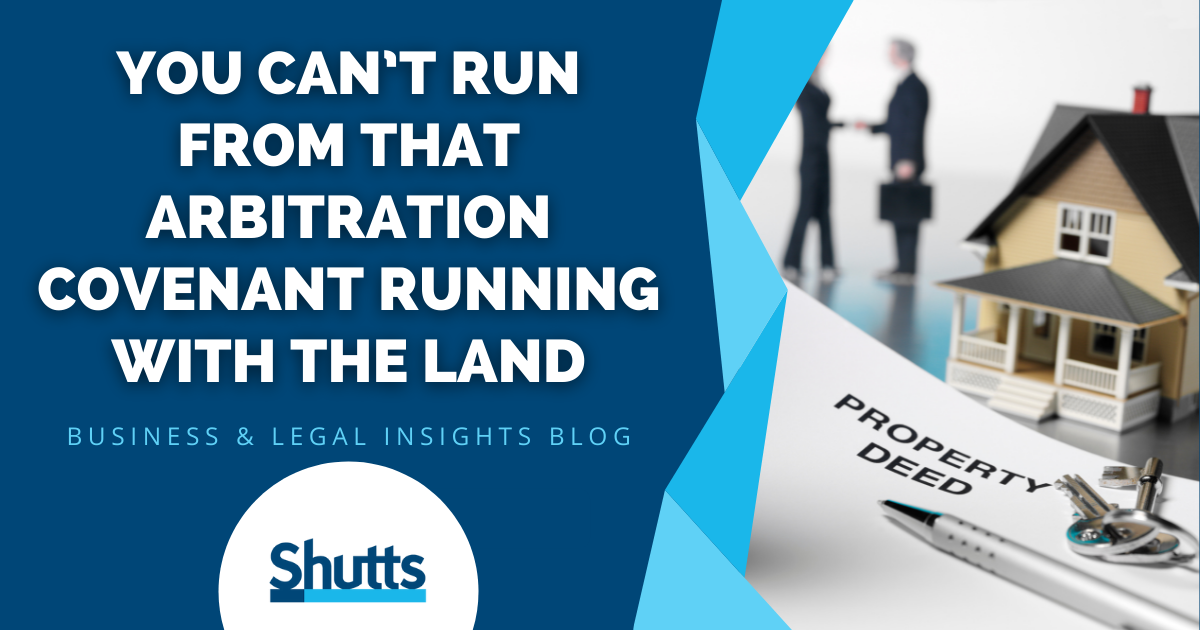 In a recent case, the Florida Supreme Court held that an arbitration covenant contained in a developer’s original deed also bound the second owner. The case serves as a good reminder that, although a subsequent owner of residential property might not think to even review the original deed, such a review is necessary because that original deed may contain provisions that bind subsequent owners. See Hayslip v. U.S. Home Corporation, --- So. 3d ---, Case No. SC19-1371 (Fla. Jan. 22, 2022).

In Hayslip, the second owner of a home in a master planned community asserted a claim against the builder for allegedly substandard stucco. The builder sought to compel arbitration based upon a provision set forth in the original deed that transferred ownership to the home’s first owner, as well as an arbitration provision set forth in the community’s governing documents. The trial court stayed the litigation and compelled arbitration. Id.

The Second District Court of Appeal affirmed the trial court’s decision and issued a certified question of great public importance, which the Supreme Court rephrased to the following: “Does a deed covenant requiring the arbitration of any dispute arising from a construction defect run with the land, such that it is binding upon a subsequent purchaser of the real estate who was not a party to the deed?” The Supreme Court then answered the certified question in the affirmative. Id.

Established Florida law and the content of the first and second deeds, as well as the governing community documents, were critical components to the Supreme Court’s decision. Florida law provides that real covenants run with the land and, therefore, bind subsequent owners. The original deed and the community’s Covenants, Conditions, and Restrictions contained provisions that required arbitration for disputes concerning a home, while the deed to the second owner expressly indicated that it was “subject to easements, restrictions, reservations, and limitations, if any.” Id. In answering the certified question in the affirmative, the Supreme Court explained:

The Hayslips argue that they are not bound by the Arbitration Provision because it is not a covenant running with the land. Covenants are divisible into two major classes: (1) real covenants which run with the land and typically bind the heirs and assigns of the covenanting parties, and (2) personal covenants which bind only the covenanting parties personally. See Palm Beach Cnty. v. Cove Club Invs. Ltd., 734 So. 2d 379, 382 n.4 (Fla. 1999); see also Caulk v. Orange County, 661 So. 2d 932, 933 (Fla. 5th DCA 1995). Although they dispute the application of the test to the facts of this case, the parties agree that the following three conditions must exist to create a valid and enforceable covenant running with the land: “(1) the existence of a covenant that touches and involves the land; (2) an intention that the covenant run with the land; and (3) notice of the restriction on the part of the party against whom enforcement is sought.” Winn-Dixie Stores, Inc. v. Dolgencorp, Inc., 964 So. 2d 261, 265 (Fla. 4th DCA 2007). We conclude that all three factors are present here and that the arbitration provision is a real covenant running with the land.

The distinction between a real covenant and a personal covenant was articulated by the Third District Court of Appeal in Maule Industries, Inc. v. Sheffield Steel Products, Inc., 105 So. 2d 798 (Fla. 3d DCA 1958). The Third District defined a real covenant running with the land as one concerning the property conveyed and the occupation and enjoyment thereof. Id. at 801. “If the performance of the covenant must touch and involve the land or some right or easement annexed and appurtenant thereto, and tends necessarily to enhance the value of the property or renders it more convenient and beneficial to the owner, it is a covenant running with the land.” Id.

The performance of the covenant in the present case affects the occupation and enjoyment of the home, as it dictates the means by which the Hayslips must seek to rectify building defects related to the home. See, e.g., Hagan v. Sabal Palms, Inc., 186 So. 2d 302, 310 (Fla. 2d DCA 1966). Not only is the covenant triggered when an apparent defect in the home is realized and the homeowners seek recourse from the builder, but the outcome of the arbitration proceeding necessarily impacts the home as well. Thus, the arbitration provision touches and concerns the property itself because it “affect[s] ‘the mode of enjoyment of the premises.’ ” Winn-Dixie Stores, 964 So. 2d at 264 (quoting Dunn v. Barton, 16 Fla. 765, 771 (1878)). Moreover, “the thing required to be done” in the present case—arbitrate the dispute—touches the enjoyment of the land because the Hayslips benefit from the defective stucco being resolved. Hagan, 186 So. 2d at 310 (quoting Maule Indus., 105 So. 2d at 801). The responsibility to build the home in accordance with the applicable laws and regulations is directly linked to the contract. For all of these reasons, we conclude that the arbitration provision touches and involves the land.

The motto of this story: Subsequent property owners should review the original deed, in addition to the community’s governing covenants, as part of buying and owning a home within a master planned community. Such documents contain provisions that likely govern the ownership of the home, regardless of whether the subsequent owner personally signed any such documents.