Written for litigators, design professionals, contractors, owners, developers, engineers and others in the field, this blog covers legal issues.

Risky Business: Florida’s Government Contractors Should Make Sure Their Contract Modifications Are Valid (a/k/a Don’t Inadvertently Donate Millions of Dollars’ Worth of Work to the Government)
4.16.20 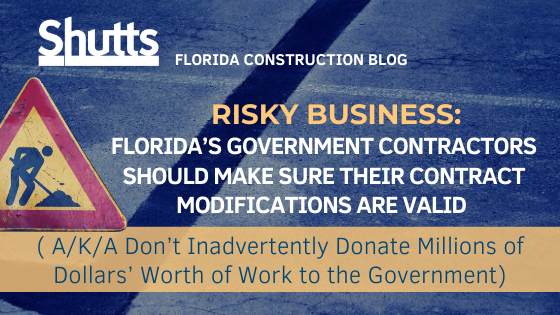 The coronavirus pandemic is creating both opportunities and risks for Florida’s contractors. For example, on April 1, 2020 the Florida Department of Transportation announced that it will take advantage of nearly empty roads by accelerating work construction projects that have a combined value of nearly $2.1 billion. This is an outstanding opportunity for Florida’s contractors because it will allow them to catch up on behind-schedule projects, or to finish on-schedule projects ahead of time, which will free them up to bid on yet more projects.

As the pandemic continues to unfold, it is reasonable to think other government entities will modify their existing contracts to meet their current needs. There are many reasons why a government agency would do so, like taking advantage of empty roads as FDOT is doing. As another example, government agencies with service contracts that are set to expire in the near future may conclude that right now it makes more sense to extend those contracts than it does to conduct a new competition for a replacement contractor. Or, government agencies may conclude that right now adding additional goods and services to the scopes of its current contracts is a better option than conducting new competitions.

While such modifications may be great opportunities for contractors to maintain their revenue stream, they also come with significant potential risks.

The Supreme Court of Florida has unequivocally held that a public contract awarded in violation of laws requiring a competition “is absolutely void” and “no rights can be acquired thereunder by the contracting party[.]” Wester v. Belote, 138 So. 721 (Fla. 1931). This means that if a contractor performs a contract that was improperly awarded without a competition, the government can recover the full contract price and keep the benefits of contract performance. In other words, a contractor who performs a contract that wasn’t awarded competitively, but which should have been, does so for free. Harris v. Sch. Brd. of Duval Cnty., 921 So. 2d 725 (Fla. 1st DCA 2006); Armco Drainage & Metal Products, Inc. v. Pinellas Cnty., 137 So 2d 234 (Fla. 2d DCA 1962).

This rule also applies to contract modifications. Even if, as an initial matter, a contract was competitively awarded, a modification can, in certain circumstances, constitute the de facto award of a new contract that has been improperly awarded without a competition. Robert G. Lassiter & Co. v. Taylor, 128 So. 14 (Fla. 1930); Asphalt Paving Sys. v. Columbia, 264 So. 3d 1110 (Fla. 1st DCA 2019).

This means that even if a contract was originally awarded properly, a contractor who performs pursuant to an improper modification may not be entitled to any payment for the as-modified work. Robert G. Lassiter & Co. v. Taylor, 128 So. 14 (Fla. 1930).

Here a few areas of inquiry that are often relevant to the propriety of a modification:

While one or more of the above are usually relevant, this list should not be relied on alone. Whether a specific modification is proper is a very fact-specific inquiry requiring in-depth legal analysis.