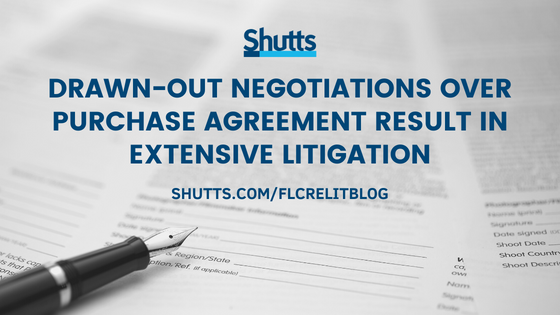 A recent case weighed the extent to which a purchaser was able to negotiate terms when exercising a purchase of property under an option in a lease.

The litigation began when, after the tenant/buyer exercised its purchase option, the landlord/seller refused to honor it. The case went to trial and the buyer won, with the trial court ordering the buyer to draft and deliver a purchase agreement to the seller within 45 days. The court also ruled that if the buyer did not act on time, the seller did not have to proceed.

According to the appellate court’s opinion, negotiations over the purchase agreement “became prolonged and contentious.” The seller gave handwritten comments to the contract and, as a result, the buyer revised the contract. The parties wound up back in court when the seller moved for a default, claiming that the buyer did not comply with the timeline set out by the court. The trial court ordered the parties to close on the buyer’s revised contract.

Apparently, the buyer intended to get financing from the seller, as the seller sent a proposed note and mortgage to the buyer in the period leading up to the closing. In response, the buyer asked the trial court to extend the closing so that the buyer could have more time to review the new documents. The seller opposed the request, but the trial court granted it, extending the closing deadline. The parties negotiated the note and mortgage for another 4 months, but never agreed on the forms. The seller again moved for default and each party blamed the other for the delays. This time, the trial court ruled for the seller on the grounds that the buyer had proposed terms that were “unreasonable and not customary in commercial transactions.”

It’s important to note that whether a breach of a contract is “material” will depend on the facts of each case.