Objecting to a real estate project in Florida carries a risk of liability
1.28.21 | Matthew R. Chait 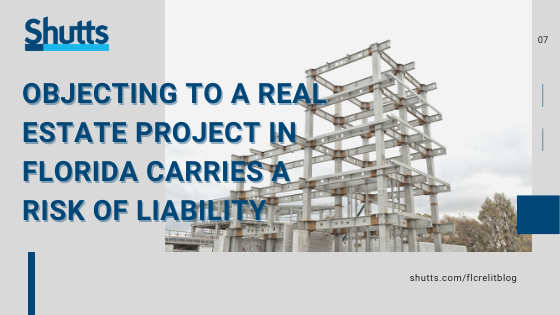 By refusing to hear an appeal of a decision by a Florida appellate court, the US Supreme Court effectively sided with a developer who won a multi-million judgment against someone who tried to undermine the developer’s project.

The case concerned an environmental activist challenging a development project in Martin County, where she had previously served as a county commissioner. Although the project was spearheaded by a private developer, the County and South Florida Water Management District were involved and were beneficiaries under various agreements related to the project. The former commissioner emailed current county commissioners, expressing concerns about the project and eventually started emailing them suggestions for how to stop the project.

The former commissioner appealed to the Florida Supreme Court, which declined to hear an appeal of the decision of the District Court of Appeal. Now the US Supreme Court has turned down the case as well, letting the decision stand. The critical conclusion is that one who objects to a developer’s project could run the risk of liability.