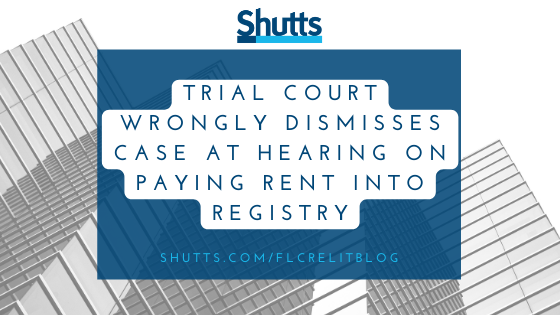 In a Florida commercial eviction, by statute where there is a court order requiring the tenant to pay rent into the court registry during the lawsuit and the tenant fails to pay, the tenant is considered to have waived its defenses and the landlord is entitled to an immediate default for possession.

Late payments by a tenant generally result in immediate eviction, which we previously covered here and here. In other words, a tenant’s defense of an eviction can end quickly if the tenant fails to pay into the registry what the court required. A recent case provided a twist, in that it was the landlord’s eviction claim that was dismissed after the trial court determined that the tenant did not owe any rent.

On appeal, the landlord made a few arguments, one of which was that it was deprived of due process when the case was dismissed at a hearing on determining what should be paid into the registry. The landlord noted that the tenant never even asked for dismissal of the case and that dismissal at a registry hearing was improper.

The appellate court agreed. A hearing on payment into the registry may result in a preliminary ruling as to some of the ultimate issues in an eviction, but it is not the same as a final hearing. The appellate court sent the case back to the trial court for more proceedings.