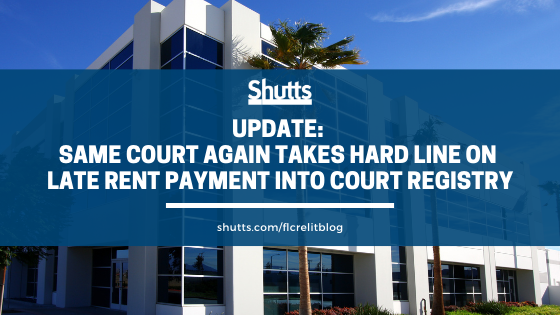 We previously wrote about a case in which a Florida appellate court strictly applied the statute requiring a commercial tenant to pay rent into the court registry during an eviction proceeding. The appellate court noted that there is no “fairness” exception to the statute’s requirement of paying on time.

Now the same appellate court has reiterated that principle, but one judge has suggested a change. In a new decision, the court agreed that the trial court correctly evicted the tenant for failure to pay all of the rent due into the court registry. In a separate “special concurrence,” one of the three appellate judges who heard the case stated that while the result was correct, the facts of the particular case (discussed in the opinion) suggested that perhaps the statute should be amended to give trial judges some discretion in dealing with payments into the registry.

Whether the Florida legislature will act remains to be seen. For now, though, there is no equitable exception in the statute.