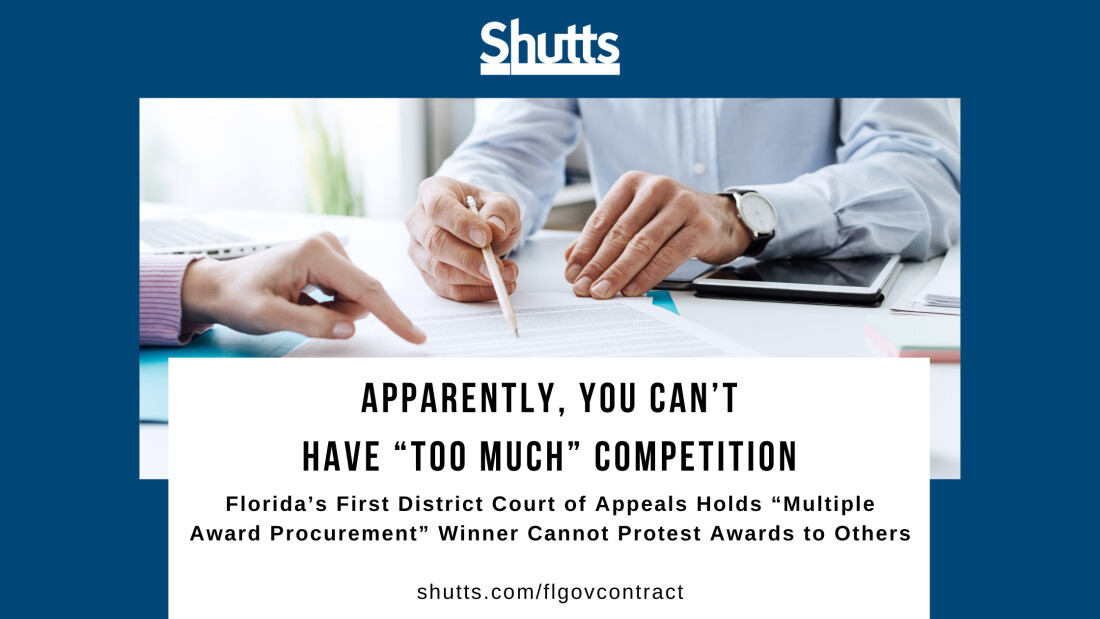 Florida’s First District Court of Appeals recently held in State of Fla., Agency for Health Care Administration v. Best Care Assurance, LLC, 302 So. 3d 1012 (Fla. 1st DCA 2020) (“Best Care”), that a contractor who had been awarded a contract in a “multiple award procurement” lacked standing to challenge awards to others.

In Best Care, the Florida Agency for Health Care Administration (“AHCA”) was procuring Medicaid insurance plan contracts for “Region 8” pursuant to § 409.974(1)(h), Fla. Stat. which states “The agency shall procure at least two plans and up to four plans for Region 8.”  In a nutshell, the selected Medicaid insurance plans in a region (there are eleven throughout the state) compete with each other for individual enrollees, then act as the enrollees’ health plan provider. The health plans are paid by the state per enrollee, meaning the more enrollees a plan has the more revenue it earns. A related provision, § 409.966(3)(e), provided “To ensure managed care plan participation in Regions 1 and 2, the agency shall award an additional contract to each plan with a contract award in Region 1 or Region 2. Such contract shall be in any other region in which the plan submitted a responsive bid and negotiates a rate acceptable to the agency.”

When AHCA made its initial awards for Region 8, it awarded a contract to Best Care and three other firms. One of three other firms was Humana, who had also won a contract in Region 2, and AHCA’s award notice for Region 8 stated that Humana was being awarded an “additional contract” pursuant to § 409.966(3)(e). However, Molina, who did not win a contract, protested. AHCA settled Molina’s protest by awarding it a contract. But, AHCA did not take an award away from anyone else. Thus, AHCA awarded a total of five contracts in Region 8.

Best Care filed a Ch. 120 bid protest challenging the fifth award to Molina, alleging it unlawfully violated § 409.974(1)(h).  Best Care argued it had standing because it would face more competition for Medicaid enrollees than the Legislature had intended when it capped the number of awards at four.  Ultimately, AHCA dismissed the protest for lack of standing.

The First District affirmed, holding that Best Care lacked standing because the alleged harm was not the sort of injury that § 409.974(1)(h) was designed to protect against.  The First District reasoned that even if it accepted Best Care’s argument the Legislature capped the number of awards that could be made at four to ensure the Medicaid insurance plans were economically viable, it would be just as reasonable to conclude this statutory scheme was intended to protect Medicaid recipients from unstable health plans, and not the economic interests of the plans themselves. The First District alternatively ruled on the merits in AHCA’s favor regarding the meaning § 409.974(1)(h), which had to be read in pari materia with § 409.966(3)(e).