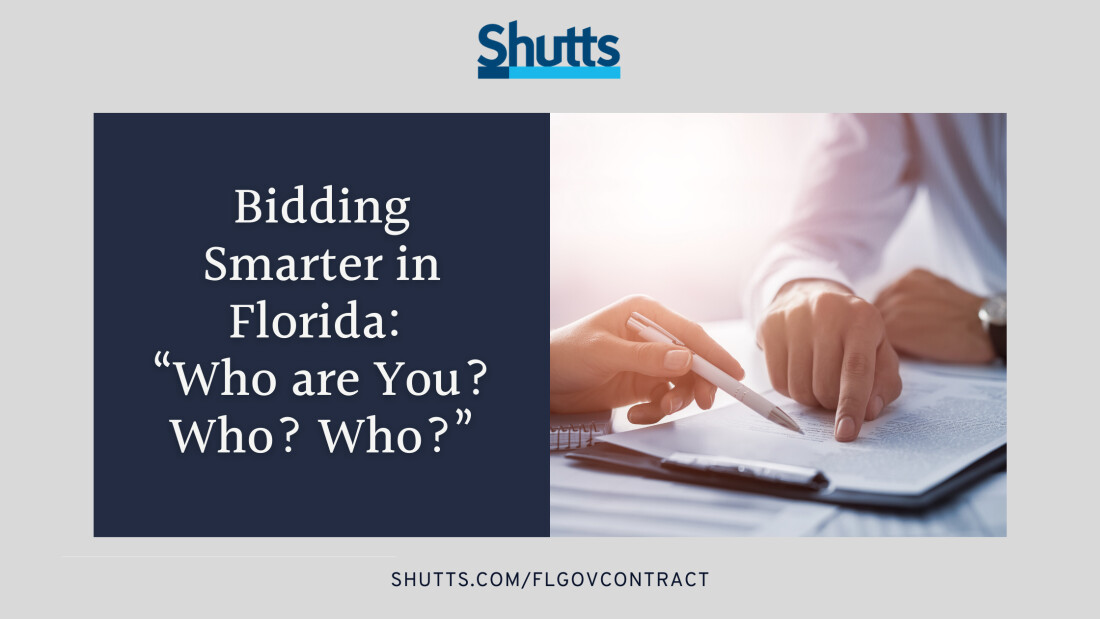 A recent procurement made me think of The Who song  (you guessed it!) “Who Are You”. It also reminded me that it may be worthwhile to remind contractors about some of the basic rules of bidding  (or, as I like to call them, the “A, B, C”s). Winning a contract is hard enough for contractors who do everything right, so they should not make things even harder for themselves with avoidable mistakes.

When a corporation has divisions or separate affiliates, be certain that the bid is submitted on behalf of the proper entity.  For example, submitting on behalf of a “divisions,” which is not a separate legal entity or a proper fictitious name could cause technical issues that otherwise would not exist.  The government may determine that because the division is not the legal entity, the “bidder” was nonresponsive or failed to comply with  a solicitation requirement to have a certain number of years’ worth of experience.

Although the contractor had a legal argument that the concerns raised by the agency were “minor irregularities” that should have been waived, the issue could have been easily avoided with more careful planning at the outset.

One of the A, B, C’s of bidding is to clearly identify the legal entity submitting the bid, and provide proof that the person who signed the bid has authority to do so. If the person signing the bid is the bidder’s president, then (in Florida, at least) no additional proof is needed. But, if anyone else is signing the bid then a formal corporate certificate or letter of authorization should be included that authorizes that person to do so. While there is some legal authority in Florida that irregularities regarding the authority of a person who signed a bid may be waived as “minor irregularities,” it is far better to never put yourself in that situation in the first place.

Contractors who would like assistance with their bids or proposals may contact Joseph M. Goldstein for assistance. The attorneys at Shutts & Bowen have substantial experience in proactively and practically handling the challenges and issues faced by contractors providing the entire spectrum of goods and services (including construction) procured by federal and Florida state and local agencies in a timely and cost-effective manner.