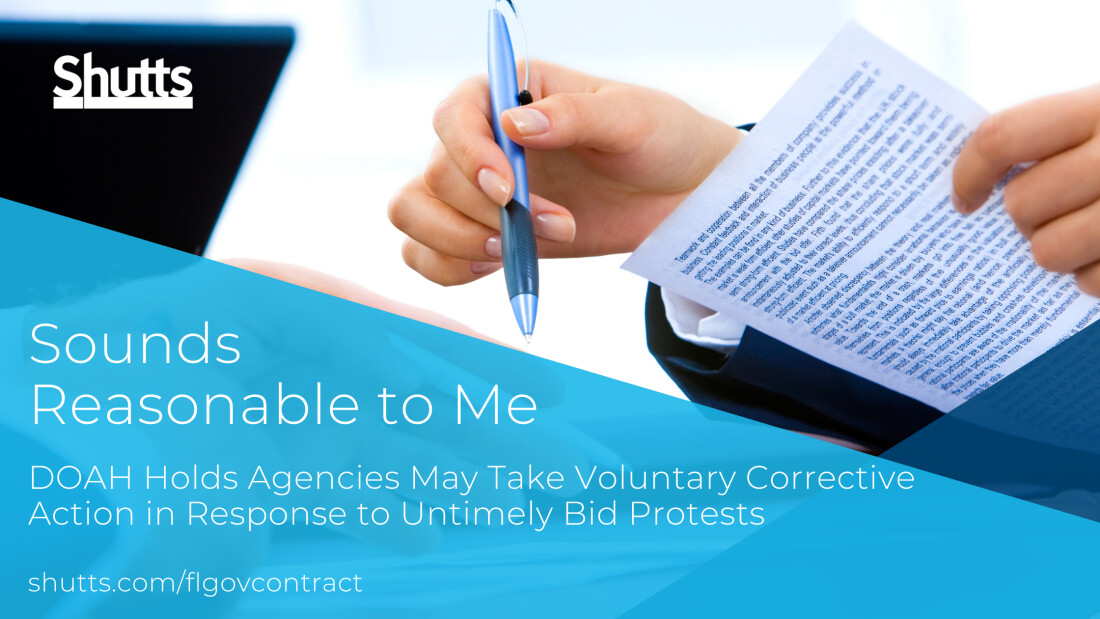 The Florida Division of Administrative Hearings (DOAH) recently issued a bid protest decision on an important procedural issue. In Cross Constr. Servs., Inc. v. Dep’t of Transp., No. 20-4214BID, 2020 WL 7425244 (Fla. Div. Admin. Hrgs. Dec. 14, 2020) (RO), ALJ Bogan found it was not arbitrary, capricious, or otherwise improper for an agency to reject all offers in response to an untimely bid protest. In practical terms, this means that even if a protester’s allegations are untimely, it may still be worth it to file a protest if the issue is significant (although in such instances protesters should know they cannot “win” the protest, the agency must “voluntarily” correct the error).

In Cross Constr., a bidder whose bid was rejected as unbalanced filed a bid protest that was one day late. The agency nonetheless reviewed the allegations, and determined the RFP contained material ambiguities that may have prevented a fair competition. As a result, the agency decided to reject all offers and resolicit. The original awardee protested the decision to reject all, arguing the agency had acted arbitrarily and unlawfully by “us [ing an untimely] protest as the impetus to more closely scrutinize the bidders’ proposals and the language of the RFP.”

ALJ Bogan rejected this argument as a matter of law, holding “The fact that a bidder may have waived its right to protest by filing an untimely petition does not itself preclude Department action to reject all bids on the ground that the RFP was flawed.” (alterations omitted).

It is well-established that agencies have broad discretion to correct procurement errors. E.g. GTECH Corp. v. State, Dep’t of Lottery, 737 So. 2d 615 (Fla. 1st DCA 1999). It is equally well-established agency procurement actions may not be overturned if they are reasonable, and do not violate a specific statute or regulation. Dep’t of Transp. v. Groves-Watkins Constr., 530 So. 2d 912, 913 (Fla. 1988).

Whether a protest is timely and whether a protest has merit are separate issues. Moreover, on its face a decision to correct a significant potential procurement error that may have prevented an agency from obtaining best value is reasonable. Finally, while section 120.57(3), Fla. Stat. states untimely protests are waived by the protester, there is nothing in the statute that says an agency may not correct errors just because they are brought to its attention in an untimely protest. Hence it is entirely proper to take voluntary corrective action in response to a meritorious, albeit untimely, protest. Volume Servs. Div. of Interstate United Corp. v. Canteen Corp., 369 So. 2d 391, 395 (Fla. 2d DCA 1979) (in “the absence of specific constitutional or statutory requirements, a public agency” “may contract in any manner not arbitrary or capricious.”).

To be sure, there may be some cases in which a decision to reject all bids is substantively improper. But, the timeliness of a bid protest that was the catalyst (or “impetus”) for such a decision should not be a material factor in such an inquiry.

Affected contractors or government agencies may contact Joseph M. Goldstein or Diana C. Mendez  for assistance. The attorneys at Shutts & Bowen have substantial experience in proactively and practically handling the challenges and issues faced by contractors providing and agencies procuring the entire spectrum of goods and services (including construction) in a timely and cost-effective manner.