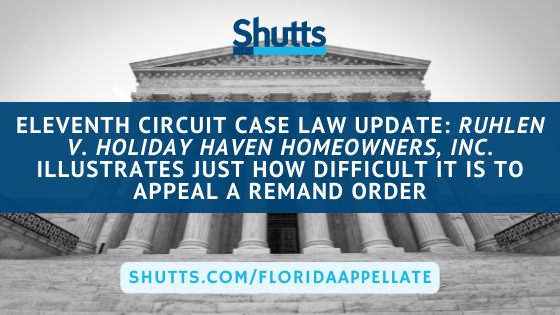 Practitioners who litigate frequently in federal court already know the Herculean task of trying to appeal a remand order sending a removed case back to state court.  Typically, by express rule, a defendant has no appellate recourse if a district court remands a case.  Subject to extremely limited and specific exceptions, “[a]n order remanding a case to the State court from which it was removed is not reviewable on appeal or otherwise.”  28 U.S.C. § 1447(d) (emphasis added).  One such exception is under the Class Action Fairness Act, or CAFA, see 28 U.S.C. § 1332(d)(1).  CAFA provides circuit courts with discretionary appellate jurisdiction to review remand orders of putative class actions.  Id. § 1453(a), (c)(1).  But that jurisdiction is discretionary; “a court of appeals may accept an appeal” to review a district court’s decision to remand a class action.  Id. § 1453(c)(1) (emphasis added).  In such instances, a defendant must petition the circuit court within ten days and convince the court to accept the appeal.  Id.; see also Fed. R. App. P. 5.  In other words, rather than filing a notice of appeal, a defendant must file a request to appeal.

As limited in application as that may sound, in Ruhlen v. Holiday Haven Homeowners, Inc., No. 21-900A22 (11th Cir. Mar. 9, 2022), the Eleventh Circuit recently explained the rule is even more rigid than that.  The facts of the case are not terribly relevant; only the procedural posture really is.  In Ruhlen, after being named defendants in a state-court class action, the defendants removed the action to the Middle District of Florida.  Id. slip op. at 1.  While in federal court, the plaintiffs amended their complaint, dropping their federal claims and adding other state-law claims.  Id. slip op. at 2.  Left without federal-question jurisdiction and with only state claims remaining, the district court sua sponte entered an order of remand.  Id.  Again, like the facts of the underlying dispute, the substantive reasons for remand are not terribly consequential here.  After the order of remand was entered, the defendants sought review of the district court’s sua sponte determination, petitioning the Eleventh Circuit for permission to appeal the remand order.  Id.  Without reaching the merits of the defendants’ arguments, the Eleventh Circuit denied the petition for lack of jurisdiction.  Id.

The court focused on the precise language of the rule: “[A] court of appeals may accept an appeal from an order of a district court granting or denying a motion to remand a class action to the State court from which it was removed . . . .”  28 U.S.C. § 1453(c)(1) (emphasis added).  “Accordingly,” as the court framed it, to resolve its jurisdictional question, it was required to “decide whether the phrase ‘an order of a district granting or denying a motion to remand a class action’ covers a district court’s sua sponte remand order.”  Ruhle, No. 21-90022, slip op. at 4.  The court concluded it did not.  Id. slip op. at 5.  After discussing several dictionary definitions of the word “motion,” see id. slip op. at 4–5, the court found itself “constrained to conclude . . . that when a [district] court sua sponte orders a remand, it is not ‘granting’ its own ‘motion’ within the meaning of § 1453(c)(1).”  Ruhle, No. 21-90022, slip op. at 5.  (There is also a fascinating back-and-forth between the majority and Judge Rosenbaum’s dissent, where she assails the majority’s “hypertechnical” application of the rule and disagrees with the court’s holding because, in her opinion, it violates the “absurdity doctrine.”  It is definitely worth a read!)

What’s the bottom line?  Orders of remand are rarely appealable—even orders remanding class actions, which have a statutory exception.  And, under Ruhle, the permissive nature of petitioning a circuit court for appellate review applies only to orders that grant or deny a motion to remand.  If the district court sua sponte remands, the plaintiff remains without appellate recourse.