Motions for Rehearing Are Now Required to Preserve for Appeal Challenges to the Sufficiency of Findings in a Final Judgment
9.8.22 | Eric M. Yesner 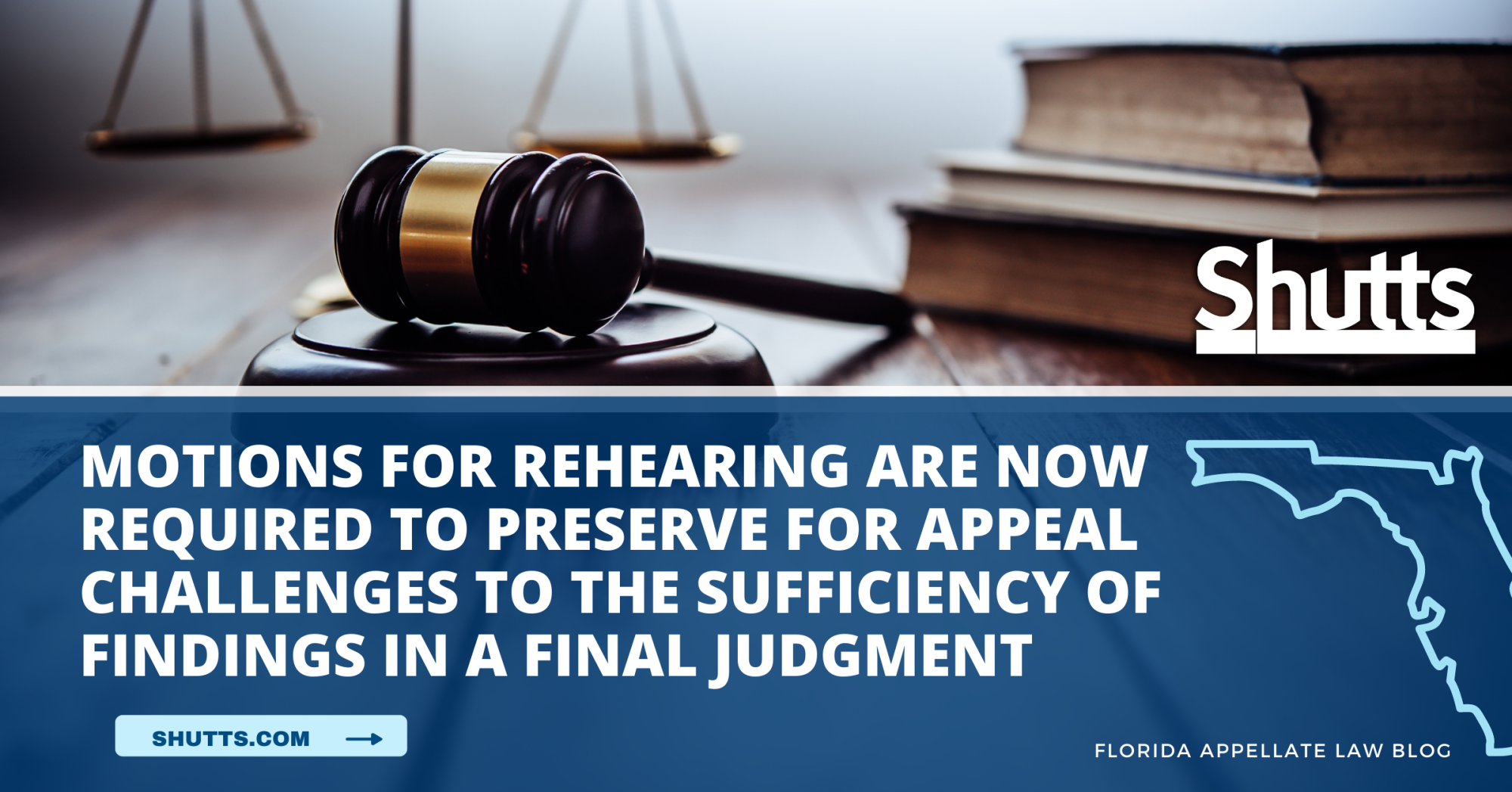 On August 25, 2022, on its own motion, the Florida Supreme Court amended Florida Rule of Civil Procedure 1.530 and Florida Family Law Rule of Procedure 12.530 now to require a motion for rehearing before challenging on appeal “the sufficiency of a trial court’s findings in the final judgment.”  While at first glance this seems to be a subtle change to the rules—something that feels like a mere formality—it’s more than that.  Trial counsel should take note: You are about to file a lot more motions for rehearing pre-appeal.

Whether by statute or by rule, certain orders issued by a circuit court must contain specific factual findings.  For instance, in marriage-dissolution proceedings, circuit courts are statutorily required to make certain factual findings and, in the final judgment, “include specific written findings of fact” as to four enumerated categories of assets, nonassets, liabilities, and other things.  § 61.075(3)(b), Fla. Stat.  Likewise, rule 1.610(c) requires the judge to expressly “specify the reasons” for issuing an injunction.

On August 25, 2022, on its own motion, the Florida Supreme Court amended Florida Rule of Civil Procedure 1.530 and Florida Family Law Rule of Procedure 12.530 now to require a motion for rehearing before challenging on appeal “the sufficiency of a trial court’s findings in the final judgment.”  Thus, now, when a circuit court enters a final judgment that is required to include specific findings, trial counsel’s failure to move for rehearing will be fatal to appellate review.  The changes took effect immediately upon the court’s issuing the opinion.  And the public has 75 days to submit comments to the court.

In the issuing opinion, the court wrote: “We have determined that amendments to these rules are necessary to clarify that filing a motion for rehearing is required to preserve an objection to insufficient trial court findings in a final judgment order.”  In re: Amends. to Fla. Rule of Civil Procedure 1.530 & Fla. Fam. Law Rule of Procedure 12.530, No. SC22-756, slip op. at 1 (Fla. Aug. 25, 2022) (emphasis added).  This was an interesting choice of words by the court: “to clarify,” the court said, that a motion for rehearing is “required.”

As to family-law matters, clarification was certainly needed.  Before last week’s rule change, there was a deep district split in our state on this issue.  In fact, it was the subject of robust debate at the Fourth District a short four years ago.  In Fox v. Fox, 262 So. 3d 789 (Fla. 4th DCA 2018), the court sat en banc to resolve its own intradistrict conflict.  In Fox, the former husband appealed the trial court’s award to the former wife of permanent periodic alimony based on the former couple’s gross monthly income, arguing the trial court did not make the express, statutorily-required findings.  The former wife responded that the former husband waived this issue by not moving for rehearing at the trial court.  In support, she cited to a Fourth District opinion published just two years earlier.  See Farghali v. Farghali, 187 So. 3d 338 (Fla. 4th DCA 2016) (“[A] party is not entitled to complain that a judgment in a marital and family law case fails to contain sufficient findings unless that party raised the omission before the trial court in a motion for rehearing.”).

In a fractured 7-5 en banc opinion, the Fourth District receded from Farghali.  Judge May, writing for the majority, wrote that because “dissolution of marriage cases are unlike other civil litigation” and because “the rules do not require the filing of a motion [for rehearing],” “[t]here is no need to call the matter to the attention of the trial court by way of a motion for rehearing” to preserve the issue for appellate review.

Judge Kuntz, joined by four others, dissented.  He wrote: “In almost every situation, we require parties to first raise issues before the circuit court to preserve the issues for appeal, and we should not treat the situation here differently.  Thus, to preserve the issue for purposes of appeal, generally a party must first challenge in the circuit court a purported lack of adequate findings to support an award in a dissolution case.  The party can raise the issue in a motion for rehearing or through other means authorized by the rules.”

The First District, in 2020, sided with Judge Kuntz’s dissent, expressly recognizing it and opining: “We are also not aware of any authority that allows us to exempt a certain class of cases from the preservation requirement based upon a determination of the relative importance of the subject matter. Absent fundamental error, issues must be preserved for appeal.”  Eaton v. Eaton, 293 So. 3d 567 (Fla. 1st DCA 2020).  In Eaton, the First District flatly held that the failure to move for rehearing before the circuit court waives the issue for appellate review.

Although the Florida Supreme Court did not reference these cases, or even acknowledge the district conflict, the Fox-Eaton split is most likely the catalyst behind the court’s notion that “clarification” was necessary.  The new rules 1.530 and 12.530 bring all districts into line with Eaton and the dissent in Fox.  When a party seeks to challenge on appeal the sufficiency of a circuit court’s final judgment, it must first move for rehearing at the circuit court.