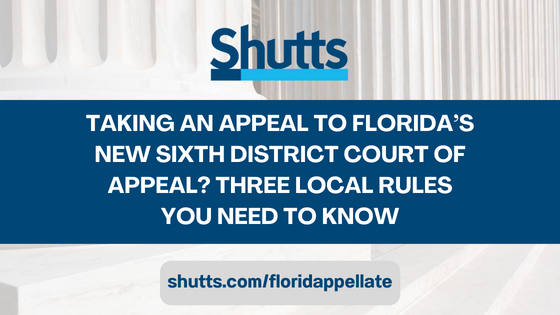 On January 1, 2023, Florida’s newest district court of appeal officially began operations—the first time a new appellate court opened in our state in 44 years. Chief Judge Meredith Sasso (formerly of the Fifth District Court of Appeal) immediately issued eight administrative orders, which basically function as “local rules” for the Sixth District. Official versions of the AOs can be found here. Some are merely ministerial, such as AO 23-08, which establishes the 2023 holiday schedule for the court (Thanksgiving Day is still observed on the fourth Thursday of November). This post highlights the three most important procedural local rules adopted by the new Sixth District; some of them are rather significant, as they supplement the Florida Rules of Appellate Procedure.

Appellants’ briefs (typically the initial brief in a merits appeal) must comply “in all respects” with rule 9.210 “and in addition shall contain” the following:

(b) As to each issue presented, a statement as to where in the record on appeal the issue was raised and ruled on as well as identification of the applicable standard of review.

This is perhaps the most significant local rule adopted by the Sixth District. It imposes an affirmative obligation on appellants to identify and state the basis for jurisdiction, and identify, state, and locate in the record all preservation considerations. This is not required by the Florida Rules of Appellate Procedure. Nor is it required by any of the other five district courts of appeal. While it remains to be seen how strictly the clerk’s office and the court will enforce this rule, it is critical not only to be aware of this AO, but also to remember it is unique to the Sixth District.

Like each of the other five district courts (but not the Florida Supreme Court), the Sixth District has streamlined its process for parties to obtain agreed-to extensions of time. In civil appeals—not in any original proceedings and not including appeals from adoptions, dependency, termination of parental rights, judicial waiver of parental notification and consent or consent only to termination of pregnancy, and any expedited or emergency appeal—parties may file notices of extension of time if both sides agree to the period of time. Parties can agree to extend the time to file initial briefs and answer briefs for up to an aggregate total of 60 days, and for reply briefs up to an aggregate total of 30 days.

The notice must be signed by the attorney seeking the extension of time and the other side need not sign. Any extensions sought for longer than the period provided in the rule must be sought by way of motion, not notice. Finally, the notice “shall be in substantially” in the following form: