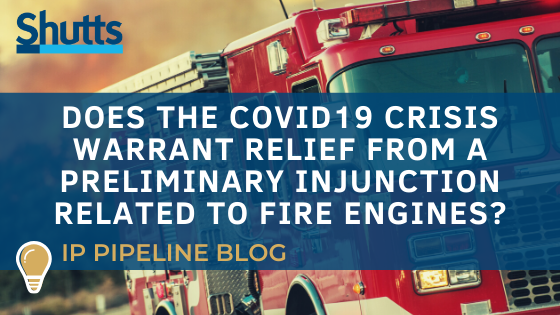 Pierce Manufacturing accuses E-One of infringing 2 of its quint configuration patents: U.S. Patent 9,597,536 and 9,814,915.  (It appears from later pleadings that Pierce has dropped claims related to the ‘915 Patent). 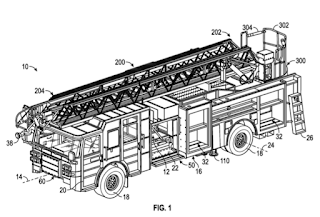 Trial had been scheduled for March 23, 2020, after the COVID19 pandemic had taken over in Florida and the U.S.  Pierce asked the court to delay trial by 60-days, but E-One would only agree if the injunction was modified.   The Court quickly set a telephonic hearing to address the motion.  During the hearing, the Court granted the motion to remove the case from a March 23, 2020 trial start, and ordered the parties to meet and confer to see if agreement could be reached on the injunction.  The Court gave the parties 20-days to see if they could reach a resolution.

The parties did not reach a full agreement, but got close.  Pierce didn’t agree a modification was appropriate, but in the case the Court ruled otherwise, Pierce and E-One agreed to provide certain relief from the injunction from the time period essentially overlapping with what will be the COVID19-related delay of the trial.  Specifically, the parties agreed that E-One may sell the Metro 100 during this time period to fire departments.  The parties agreed that if the jury eventually determines that sales of the Metro 100 are infringing, these interim sales can be factored into a damages award.  The parties further agreed that nothing about permitting the interim sales during this COVID19 crisis could be used by the parties to argue there would be no irreparable harm in continued sales of the Metro 100.

The parties were unable to agree as to whether or not a future injunction could cover these interim sales.  The Court entered the modification to the preliminary injunction, and sided with E-One in holding that:

Any such Interim Sales, as defined by the receipt of a purchase order from a bona fide purchaser, shall not be subject to any future injunction, regardless of the outcome of the jury trial in the case.