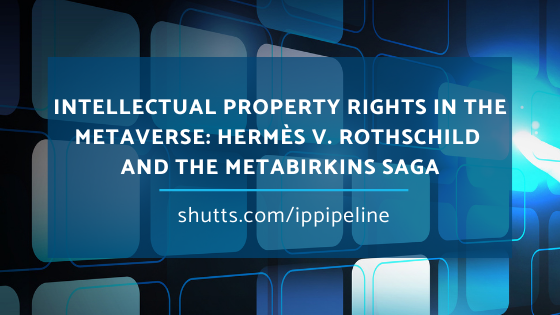 Intellectual property rights can get muddled in the “real world” and with the advent of virtual worlds, such as the Metaverse, this will only further complicate matters for brand owners who will now have to monitor and enforce their rights in the boundless virtual world. Indeed, legal disputes are already surfacing in the courts.

On January 14, 2022, Hermès International and Hermès of Paris, Inc. (collectively, “Hermès”) lodged a complaint alleging trademark infringement, dilution, and unfair competition claims against Mason Rothschild.[1] In the nearly 50-page complaint, Hermès alleged that Rothschild “is a digital speculator who is seeking to get rich quick by appropriating the brand METABIRKINS for use in creating, marketing, selling, and facilitating the exchange of digital assets known as non-fungible tokens (“NFTs”).” Rothschild’s addition of the generic term “meta,” according to Hermès, is not enough to distinguish the rip off of Hermès’ famous trademarks.

For his part, Rothschild uses a website to sell the MetaBirkins NFTs, in response to “community demand” after his sale of the Baby Birkin NFT which he reportedly sold for 13 Ethereum (approximately $23,500).[2] Rothschild launched a collection of over 100 MetaBirkins NFTs which have been available for sale in NFT marketplaces such as OpenSea and others. Rothschild also created various social media accounts – which are linked to his online stores – using the handle @MetaBirkens. Although he has not yet appeared in the lawsuit, Rothschild has penned an open letter to Hermès asserting the First Amendment in his defense. As of this writing, the letter was available on the @MetaBirkins Twitter account.[3]

According to the complaint, Rothschild first claimed the MetaBirkins were homage to the iconic Hermès Birkin bag, but changed course after early interactions with Hermès before the lawsuit was filed. Rothschild has since refused to stop selling MetaBirkins NFTs and his actions have already spurred numerous counterfeits creating a larger enforcement problem for Hermès which will undoubtably extend beyond this dispute.

The case against Rothschild raises significant issues for brand owners who are also attracted to the virtual world and the promise it holds for a lucrative future. Take, for example, the recent Fortnite x Balenciaga collaboration.[4] While the Metaverse itself is a rapidly evolving space, brand owners must be prepared to take swift action in policing their marks in the virtual worlds with as much diligence as in the physical world, if not more. The only certainty here is, brand owners will soon (if not already) need to take affirmative steps to protect their intellectual property rights in the Metaverse.

Ever since Facebook, Inc. announced its rebranding and corporate name change in October 2021, the interest in the virtual world in general, and the Metaverse in particular, has increased significantly. Non-fungible tokens, or NFTs, are a blockchain-based assets that are used to validate the digital ownership of any asset linked to the currency and can be sold or traded in virtual worlds, such as the Metaverse.[5] This raises several interesting questions: what exactly is the consumer getting when they purchase MetaBirkins (or other) NFTs – a digital image or a smart contract on the blockchain? Can a smart contract on the blockchain bearing a similarity to a brand owner’s trade dress be infringing? Time will tell, but until then, this issue will continue to crop up in the courts.