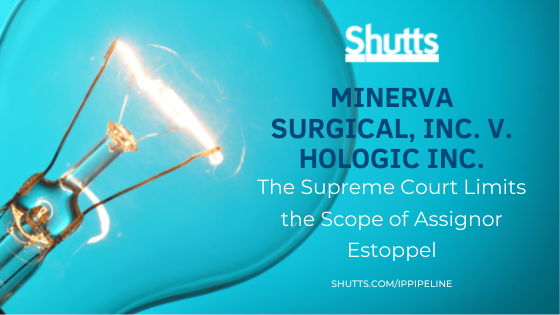 Rooted in the principle of fairness, the doctrine of assignor estoppel generally prevents an inventor, who had previously assigned their patent rights to another for value, from later contesting the validity of the assigned patent.   On June 29, 2021, in Minerva Surgical, Inc. v. Hologic Inc., the Supreme Court upholds the doctrine of assignor estoppel, but finds that “assignor estoppel only applies when the assignor’s claim of invalidity contradicts explicit or implicit representations he made in assigning the patent.”  Minerva Surgical, Inc. v. Hologic Inc., — S.Ct. — (2021), located at: https://www.supremecourt.gov/opinions/20pdf/20-440_9ol1.pdf.

The Court provides a few examples in which assignor estoppel would not apply allowing the inventor to contest the validity of a patent previously assigned by the inventor:

The Court’s decision narrowing of the scope of assignor estoppel is not limited to these three examples. However, many questions have been left unanswered.

Notably missing from the Court’s examples is when prior art is later discovered after issuance of the patent. An inventor may assign their patent without any knowledge of the prior art that would later form the basis of their invalidity position. Although an inventor has “a duty to disclose to the Office all information known to that individual to be material to patentability” during prosecution of the patent under 37 CFR § 1.56, the inventor is not aware of all of the prior art in the universe at the time. Nor does the inventor necessarily make any explicit or implicit representations regarding prior art to which the inventor has no knowledge. The prior art forming the basis–or at least part of the basis–of the inventor’s later invalidity position may only be discovered well after the patent issues and the inventor assigns their patent.

The Court’s discussion of a previous assignor estoppel decision in Westinghouse Elec. & Mfg. Co. v. Formica Insulation Co., 266 U. S. 342 (1924) seems to state that the inventor would be estopped from presenting prior art as the basis of their invalidity position–even if they were previously unaware of the prior art:

After thus endorsing assignor estoppel, the Court made clear that the doctrine has limits. Although the assignor cannot assert in an infringement suit that the patent is in-valid, the Court held that he can argue about how to construe the patent’s claims. Here, the Court addressed the role in patent suits of prior art—the set of earlier inventions (and other information) used to decide whether the specified invention is novel and non-obvious enough to merit a patent. “Of course,” the Court said, the assignor cannot use prior art in an infringement suit “to destroy the patent,” because he “is estopped to do this.” But he can use prior art to support a narrow claim construction—to “construe and narrow the claims of the patent, conceding their validity.”

This is just one of many questions that will need to be answered in future litigation.