Romag Fasteners v. Fossil:  Willful Infringement is Not Required to Recover an Award of Profits in Trademark Infringement
8.12.20 | Jodi-Ann Tillman 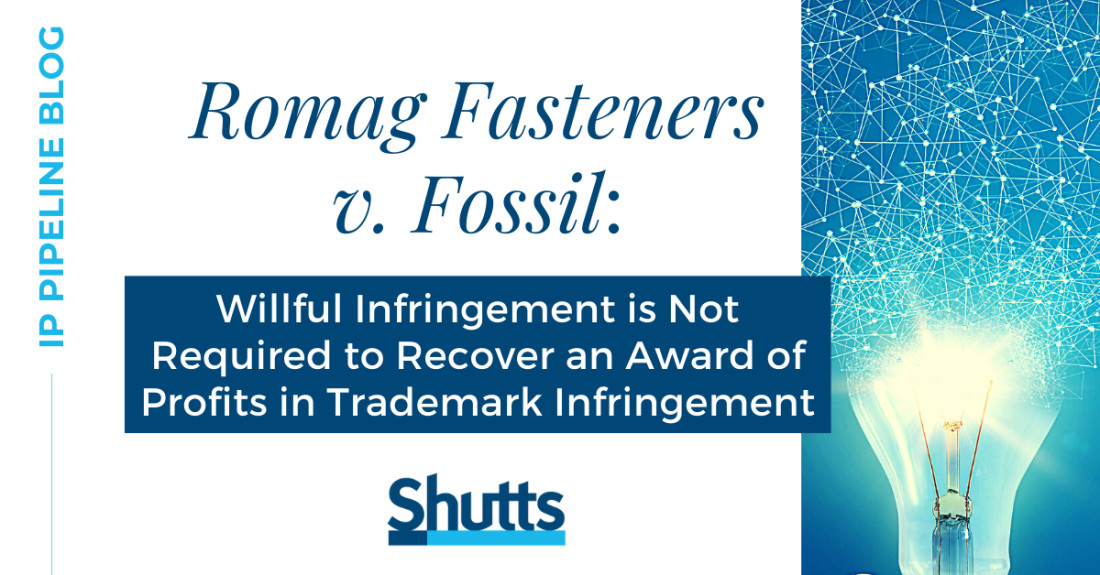 In a recent decision, the Supreme Court of the United States held unanimously that a plaintiff in a trademark infringement suit does not have to prove willfulness as a prerequisite for an award of defendant’s ill-gotten profits under the Lanham Act.  The case before the Supreme Court, Romag Fasteners Inc. v. Fossil Inc., et al., 140 S. Ct. 1492 (2020), arose from the Second Circuit where the rule has long been held that a plaintiff must prove that a defendant willfully infringed the trademark owner’s rights in order to get an award of the defendant’s profits.

Romag—a manufacturer of metal fasteners, and Fossil—well known for its premium leather goods—had a contractual relationship with Fossil agreeing to use Romag’s fasteners in Fossil’s leather goods.  One of Fossil’s authorized manufacturers in China was instead using counterfeit fasteners, albeit without Fossil’s knowledge.  Upon this discovery, Romag filed suit against Fossil for patent and trademark infringement.  Because the jury decided that Fossil did not act willfully, but rather with “callous disregard” for Romag’s trademark rights, the trial court denied Romag the profit award.  The Federal Circuit, following controlling Second Circuit precedent, affirmed the decision, and the Supreme Court vacated in Romag.

Justice Gorsuch delivered the opinion for the Court noting after careful examination of the Lanham Act’s remedies provisions, that the statute spoke “often and expressly about mental states.”  Romag, 140 S. Ct. at 1495.  In rejecting Fossil’s argument that “principles of equity” in the statute required willfulness, the Court found that there was no such requirement in 15 U.S.C. § 1117(a), and that it is “unlikely Congress meant ‘principles of equity’ to direct [the Court] to a narrow rule about a profits remedy within trademark law.”  Id. at 1496–97.  The relevant case law did little more than muddy the waters.  Nonetheless, Gorsuch wrote, “a trademark defendant’s mental state is a highly important consideration in determining whether an award of profits is appropriate.”  Id. at 1497.  Importantly, willfulness—while not an “inflexible precondition”—remains a critical consideration, though the Court did not opine on the proper application.

In general, monetary damage awards are not automatic, and thus are not always awarded in trademark infringement cases under the Lanham Act.  See 15 U.S.C. § 1117.  Indeed, the more prevalent, and often preferred, remedy is an injunction requiring the defendant to stop the infringing conduct.  Century 21 Real Estate Corp. v. Sandlin, 846 F.2d 1175, 1180 (9th Cir. 1988).  In cases where monetary damages are awarded, it is usually based on the actual damages suffered by the trademark owner.  However, courts also have discretion to award disgorgement of a defendant’s profits.  15 U.S.C. § 1117(a).  The rationale being that, the defendant’s profits are a reasonable measure of the harm suffered by the trademark owner, whose actual damages are often difficult (or even impossible) to measure.  Thus, a defendant who has been unjustly enriched by infringing a trademark owner’s rights should not be entitled keep the profits.  An award of defendant’s profits attributable to the infringing conduct should also serve as a deterrence from future willful infringement.

Concurring in the judgment only, Justice Sotomayor wrote separately to criticize the majority’s “agnostic” approach to a profits award in cases of an innocent versus a willful infringer.  Romag, 140 S. Ct. at 1498.  Thus, it seems, without a framework for determining the proper weight for evidence of willfulness, this “agnosticism” may result in a shortfall from the Court’s stated intent to resolve the split of authority among the federal circuits; the result of which is:  circuit courts in the “willfulness is an absolute prerequisite” camp may continue by giving heavy weight to such evidence.  On the other hand, it seems, that the remaining circuits may continue with business as usual:  treating willfulness as simply one of several factors in the analysis.

All told, Romag is a significant decision impacting a trademark owner’s ability to recover a defendant’s profits regardless of the defendant’s intent.  However, considering that disgorgement is an equitable remedy, courts will still have broad discretion on whether to make such an award.  But just how this decision will impact the frequency and amounts of profits awards specifically, and monetary damages awards in general, remains to be seen.

Romag presents the opportunity for trademark owners to possibly get an award of a defendant’s profits based on infringing actions by third parties.  Thus, Romag is also a cautionary tale for trademark users who are reminded to carefully monitor their supply chains to mitigate the risk of unintentional infringement.