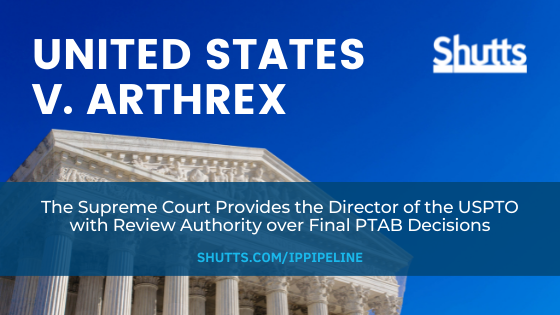 On June 21, 2021, in United States v. Arthrex, the Supreme Court finds that Administrative Patent Judges (“APJs”) on the Patent Trial and Appeal Board (“PTAB”) panels for inter partes review (“IPR”) proceedings to be acting as Principal Officers in violation of the Appointments Clause. Rather than dismantle PTAB, the Supreme Court decides the appropriate remedy to be able to constitutionally enforce the decisions of PTAB is to provide the Director of the USPTO with additional authority so that “[t]he Director accordingly may review final PTAB decisions and, upon review, may issue decisions himself on behalf of the Board.” United States v. Arthrex, — S.Ct. — (2021), located at: https://www.supremecourt.gov/opinions/20pdf/19-1434_ancf.pdf.

However, the Federal Circuit’s constitutional remedy sidestepped the fundamental issue–the Director’s supervision over APJs’ duties as decisionmakers. Therefore, the Supreme Court concludes that the more logical constitutional cure is to provide the Director with review authority over final PTAB decisions. The Supreme Court notes that these decisions by the Director regarding final PTAB decisions may be appealed: “[w]hen reviewing such a decision by the Director, a court must decide the case ‘conformable to the constitution, disregarding the law’ placing restrictions on his review authority in violation of Article II.”

As a direct result of the decision, the Supreme Court holds that there is no need for a new hearing before a new panel of APJs in the underlying IPR between Arthrex, Inc. and Smith & Nephew, Inc. Rather, PTAB’s final decision finding the patent invalid stands and the case is remanded to the Director who now has the authority to review the final PTAB decision.