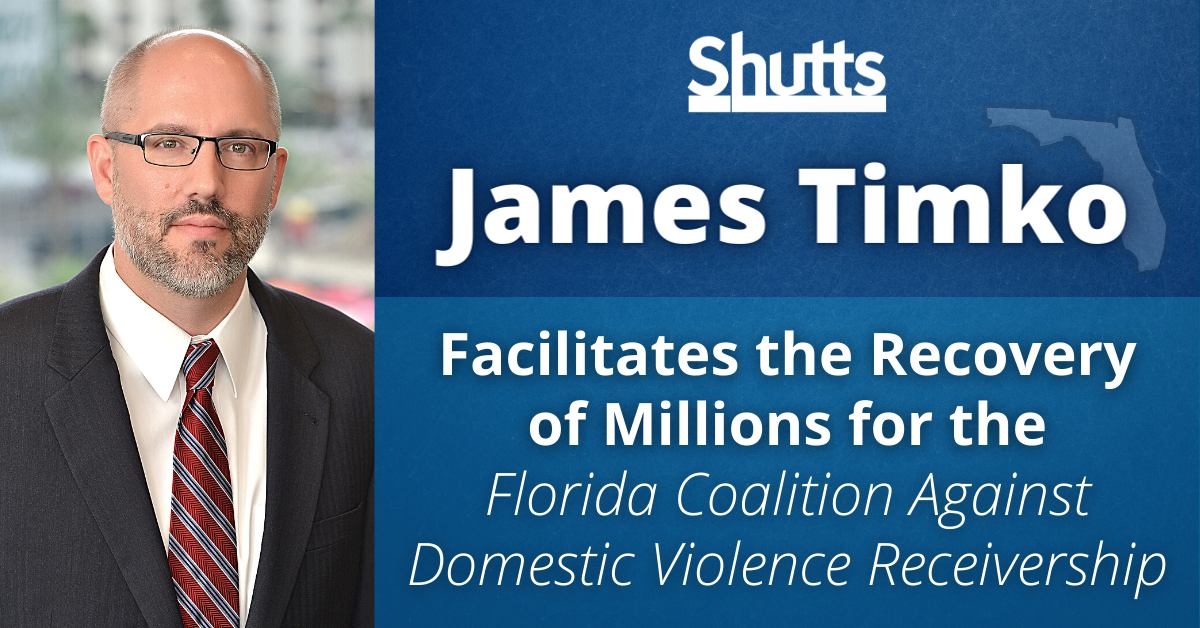 Shutts & Bowen LLP partner James Timko facilitated a successful settlement on behalf of client Mark Healy, the Receiver for the Florida Coalition Against Domestic Violence, resulting in millions of dollars to be utilized for the benefit of certified domestic violence shelters in the State of Florida. This settlement resolved multiple lawsuits resulting from a yearslong scheme by the organization’s ex-CEO to defraud the agency primarily funded by taxpayer dollars.

The Governor and Attorney General held a press conference on Thursday, August 26, in Orlando to announce the good news that the State had recovered the sum.

Shutts represents the current Receiver for Florida Coalition Against Domestic Violence (FCADV), who was appointed when it was learned that the former CEO of FCADV received $7.5 million in excessive compensation (in the form of bonuses, raises and the payout of accrued paid time off) over a three-year period. At the time, FCADV was named by statute as the provider of funding and oversight to all certified domestic violence shelters in Florida. After the Miami Herald revealed the compensation scheme, a media firestorm ensued and within weeks a new Receiver was appointed. With Shutts’ assistance, the Receiver took over the operations of FCADV in March of 2020. Since that time, multiple lawsuits and investigations have followed. On behalf of the Receiver, Shutts sued the former directors and officers involved in the scheme to defraud the coalition, as well as insurance carriers for coverage. The Shutts team, representing the interests of the Receiver throughout the litigation and mediation process, was led by James Timko, with assistance from attorneys Michael L. Gore, Jason Gonzalez, Benjamin Gibson and Kelscey Boyle, with further support from Lisa Finelli.

After seven months of mediation, numerous lawsuits have now been resolved through the significant settlement result, with the agreement not only providing for the dissolution of FCADV and its charitable foundation, but also returning funds to domestic violence shelters. According to the Miami Herald, the dissolved funds will be distributed directly to the 42 domestic violence centers the coalition was intended to support.

About James A. Timko

James A. Timko is a partner in the Orlando office of Shutts & Bowen, where he is a member of the Creditors' Rights/Bankruptcy Practice Group. Consistently recognized by Best Lawyers in America® for his work in business litigation, James has also received Martindale-Hubbell's highest rating for this work involving distressed assets, bankruptcy and commercial litigation. James represents creditors, debtors, secured, lenders, mortgage companies, landlords, franchisors, bankruptcy trustees and other business enterprises in chapter 7, chapter 11, and chapter 15 bankruptcy cases and in assignment for the benefit of creditors cases. James also has significant experience resolving general commercial disputes. He's also represented institutional lenders in connection with asset based lending transactions and real estate transactions. A national speaker and author on creditors' rights and bankruptcy law, James is the former president of the Florida chapter of the Turnaround Management Association, the premier international professional organization dedicated to corporate renewal and turnaround management.

Ben Gibson is a partner in the Tallahassee office of Shutts & Bowen LLP, where he is Vice-Chair of the Appellate practice group. Ben represents clients facing high-stakes legal issues at the intersection of business, politics, and government. His statewide practice focuses on representing corporate, political, and government clients in appellate, litigation, and administrative matters as well as government affairs.

Kelscey A. Boyle is an Associate in the Orlando office of Shutts & Bowen LLP, where she is a member of the Insurance Practice Group. Kelscey focuses her practice on insurance defense and complex commercial litigation.