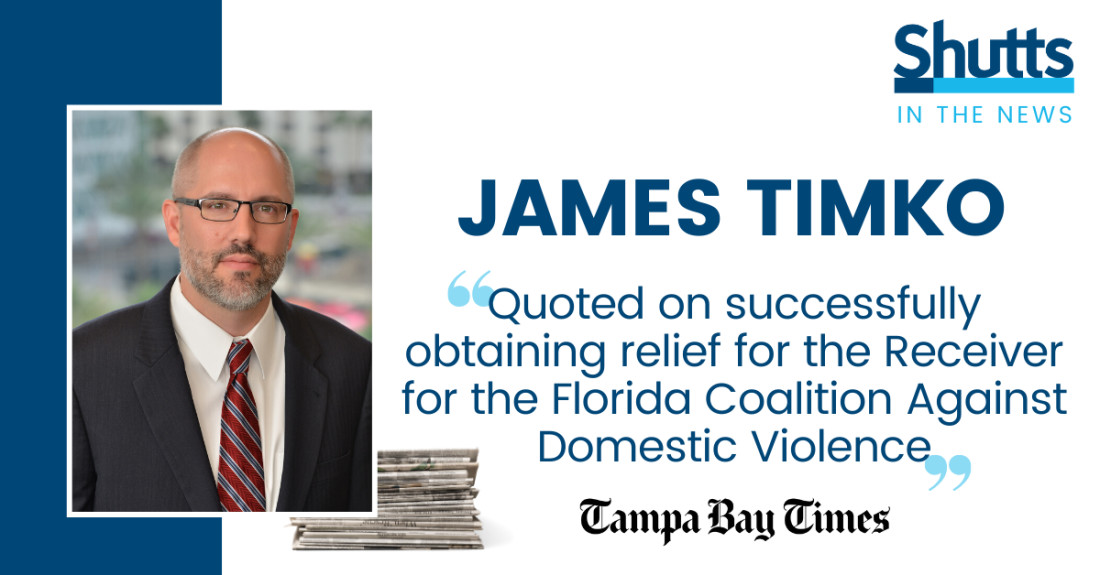 James Timko, a partner in Shutts & Bowen LLP’s Orlando office, was recently quoted in a Tampa Bay Times article on successfully obtaining relief for his client, the Receiver for the Florida Coalition Against Domestic Violence (the “Coalition”).

The article, titled “Florida coalition that paid CEO $7.5 million has its money taken over by receiver,” discusses the recent order signed by Judge Ronald Flury allowing the appointed receiver of the Coalition to potentially access up to $1.5 million of the Florida Coalition Against Domestic Violence Foundation’s assets for the administration and support of domestic violence shelters throughout the state. James was quoted in the article to say that the new receivership “allows for financial stability of the Coalition and puts the Foundation to its intended use.” James worked with the Attorney General’s office to obtain this relief for his client.

About James A. Timko

James A. Timko is a partner in the Orlando office of Shutts & Bowen, where he is a member of the Creditors' Rights/Bankruptcy Practice Group and a business litigator. James has received Martindale-Hubbell's highest rating as an attorney whose practice involves distressed assets, bankruptcy and commercial litigation. He's also a certified circuit civil mediator. James represents creditors, debtors, secured, lenders, mortgage companies, landlords, franchisors, bankruptcy trustees and other business enterprises in chapter 7 and chapter 11 bankruptcy cases and in assignment for the benefit of creditors cases. James also has significant experience resolving general commercial disputes, including copyright disputes. He's also represented institutional lenders in connection with asset based lending transactions and real estate transactions. A national speaker and author on creditors' rights and bankruptcy law, James is the former president of the Florida chapter of the Turnaround Management Association, the premier international professional organization dedicated to corporate renewal and turnaround management.