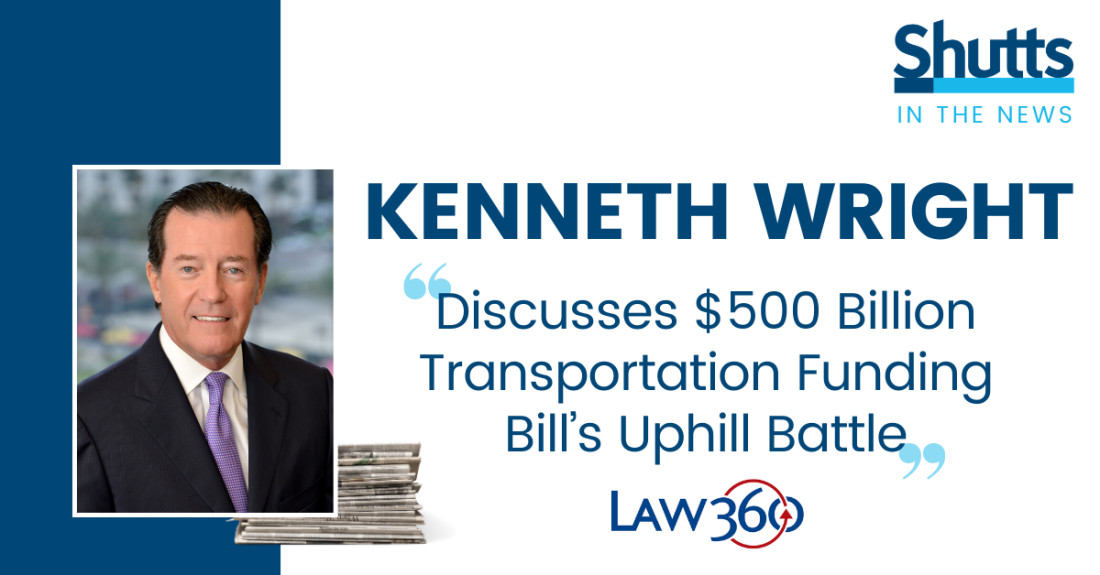 Kenneth W. Wright, a partner in Shutts & Bowen LLP’s Orlando office, was recently quoted in an article by Law360 discussing a proposed five-year bill that calls for investing nearly $500 billion in the nation’s transportation infrastructure.

Ken, who served as a former vice-chair of the Florida Transportation Commission and is a member of the statewide Steering Committee for the Florida Transportation Plan, discussed the merits and pitfalls of the bill with Law360. The article, titled “House Dems' 'Green' Transpo Funding Bill Faces Uphill Battle,” discusses various inclusions within the transportation bill, including environmental reforms facing political opposition from lawmakers. With a fall deadline to lock in a replacement for current transportation funding legislation, the “Investing in a New Vision for the Environment and Surface Transportation in America Act” has been embraced by House Democrats and challenged by committee Republicans for “overly aggressive climate change” provisions, among other points.

Discussing the bill’s ‘green’ goals, the Vehicle Miles Traveled Pilot Program and discretionary grant programs, Ken provides commentary on both the feasibility of the bill’s passing, as well as the politically charged atmosphere. According to the article, neither Republicans nor Democrats expect the full-fledged bill to rebuild highways, railways, transit and other infrastructure to pass this year, with the likelihood of “an extension of the FAST Act or some other stopgap funding measure” to take effect. In the article, Ken agreed that lawmakers would be unlikely to reach a bi-partisan long-term agreement before the deadline, and said, “It's a zero-sum game, and again that goes on both sides.”

Kenneth W. Wright is a partner in the Orlando office of Shutts & Bowen LLP, where he is a member of the Government Relations Practice Group. Having worked in government law, land use, public finance and transportation, Kenneth has a strong background in issues ranging from public sector litigation to land acquisition. He currently focuses on government relations, land use/environmental law, and administrative and regulatory law, often representing clients before government entities at the local and state levels, including commissions and regulatory agencies. This involves work on a wide variety of issues, such as zoning, environmental and other public policy concerns. Kenneth previously served as vice-chair of the Florida Transportation Commission and chaired the Florida Environmental Regulation Commission for nearly ten years. He formerly served as Chair of the Florida Fish and Wildlife Conservation Commission and as a Trustee on the Board of Directors for Hubbs-Sea World Research Institute. A former member of the East Central Florida Regional Planning Council, he acted as Chairman of the Orlando/Sanford International Airport and was on its board for eight years, where he now acts as general counsel. Kenneth was previously general counsel to the Orlando-Orange County Expressway Authority and is presently right-of-way counsel to the Central Florida Expressway Authority.