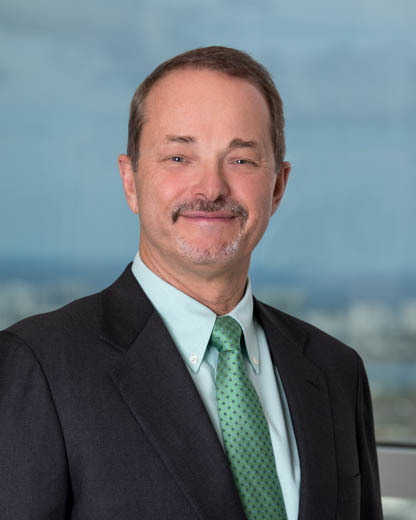 Harold Edward “Ed” Patricoff, Jr. is a partner in Shutts & Bowen’s Miami office, where he is Co-Chair of the firm’s International Dispute Resolution Practice Group. Named one of South Florida’s “Most Effective Lawyers” by the Daily Business Review in the Business/Complex Litigation category, Patricoff is recognized as one of the preeminent international commercial litigators in his industry.

An established and seasoned litigator, Patricoff has received numerous awards and recognitions. In addition to being one of the Daily Business Review’s “Most Effective Lawyers,” he has been one of South Florida Legal Guide’s Top Lawyers for 15 straight years. He also recently made his seventh appearance on the Florida Super Lawyers list, an honor reserved for those lawyers who exhibit excellence in practice.

Outside of his practice, Patricoff is deeply embedded in his community, serving on the board of directors for several organizations, including the YMCA of South Florida, the Miami Symphony Orchestra, the Jay Malina Trade Consortium, the American Nicaraguan Foundation and the Ted Smallwood Store. He is also past chairman of the Metro Miami Board for the American Heart Association.

Patricoff earned a Bachelor of Science in biology and political science as well as a Doctor of Jurisprudence from Stetson University. He travels frequently to Europe and Latin America and is fluent in Spanish.

Since 2016, Shutts & Bowen has participated in the University of Miami School of Law’s International Arbitration LL.M. Practicum Program, offering international law students the opportunity to obtain practical experience in the field of international litigation and arbitration with Miami-based law firms for academic credit while pursuing the LL.M. degree. Under Patricoff’s supervision, the students are provided with diverse and challenging projects in a positive, intellectually challenging and professional work environment.

Over the years, more than 25 students from 6 continents and diverse countries such as Australia, Bangladesh, Canada, Colombia, Morocco, Nigeria, Russia, Spain, the United Kingdom, and Venezuela have been welcomed by Patricoff and his international team. They have worked on International Chamber of Commerce, London Court of International Arbitration, American Arbitration Association and International Centre for Dispute Resolution arbitrations; traveled with Shutts partners for mediations, depositions, and hearings; and gained invaluable insights into the working style, standards and expectations that a young international attorney should meet for a successful career.