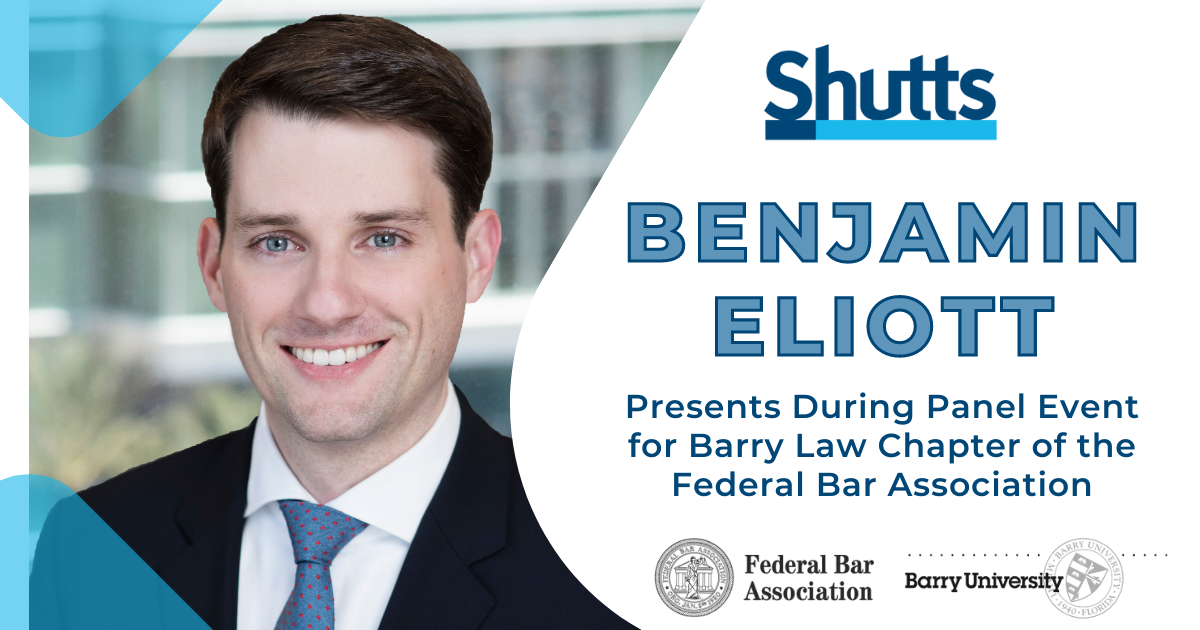 Benjamin Elliott, an attorney in Shutts & Bowen LLP’s Orlando office, recently spoke before students during a panelist program presented by The Barry University School of Law Chapter of the Federal Bar Association (BFBA).

Benjamin, who was recently named as an officer of the Federal Bar Association’s Orlando Chapter, joined the panel group of attorneys practicing in different areas of federal law for the event program, entitled “A Day in the Life of a Federal Attorney.” During the event, students had the opportunity to explore different areas of federal law and ask questions pertinent to practicing in federal court.

The Barry Law Chapter of the Federal Bar Association connects students with the Orlando and National Chapters of the FBA. The Barry University Dwayne O. Andreas School of Law provides graduates with the skills and knowledge needed to aid society through the competent and ethical practice of law. A Catholic institution of higher education, Barry University was founded in 1940 by the Adrian Dominican Sisters.

Benjamin Elliott is a senior associate in the Orlando office of Shutts & Bowen LLP, where he is a member of the Business Litigation Practice Group. Benjamin’s practice includes the representation of public and private clients in large multi-party litigation. Benjamin joined Shutts from a large Northeast law firm and previously served as a Special Assistant to the General Counsel to the Governor of Connecticut as well as an intern in the United State Attorney’s Office for the District of Connecticut. Prior to his career in law, he served as the Executive Director of the Macchi School, an independent middle and high school of gifted, indigent students in rural Tobati, Paraguay.