Benjamin Gibson Elected Vice Chairman of the State Board of Education 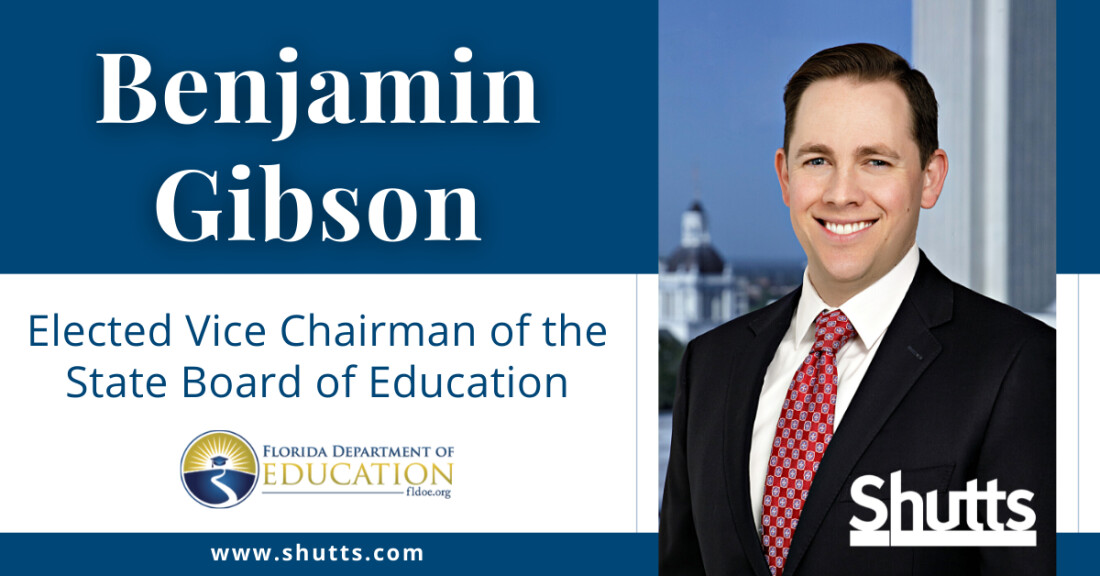 Benjamin J. Gibson, a partner in Shutts & Bowen LLP’s Tallahassee office, was named Vice Chairman of the State Board of Education on July 14, 2021.

Ben Gibson is a partner in the Tallahassee office of Shutts & Bowen LLP, where he is Vice-Chair of the Appellate practice group. Ben represents clients facing high-stakes legal issues at the intersection of business, politics, and government. His statewide practice focuses on representing corporate, political, and government clients in appellate, litigation, and administrative matters as well as government affairs. Most recently, he was recognized in the INFLUENCE 100, Influence Magazine’s list of the 100 most influential people in Florida politics. Ben also serves as a Commissioner on Florida’s First District Court of Appeal Judicial Nominating Commission.

Ben previously served as General Counsel to Governor Ron DeSantis’ Transition Team, advising the then-Governor-elect on the appointment of three Florida Supreme Court Justices.  Prior to joining the firm, Gibson served as the Deputy General Counsel and an Assistant General Counsel to then-Florida Governor Rick Scott for nearly five years. He provided counsel to the Executive Office of the Governor on high-profile executive branch legal issues including issues relating to ethics, financial disclosure, public records, and the Sunshine Law.