Benjamin Gibson Recognized Among the 100 Most Influential Floridians in Politics 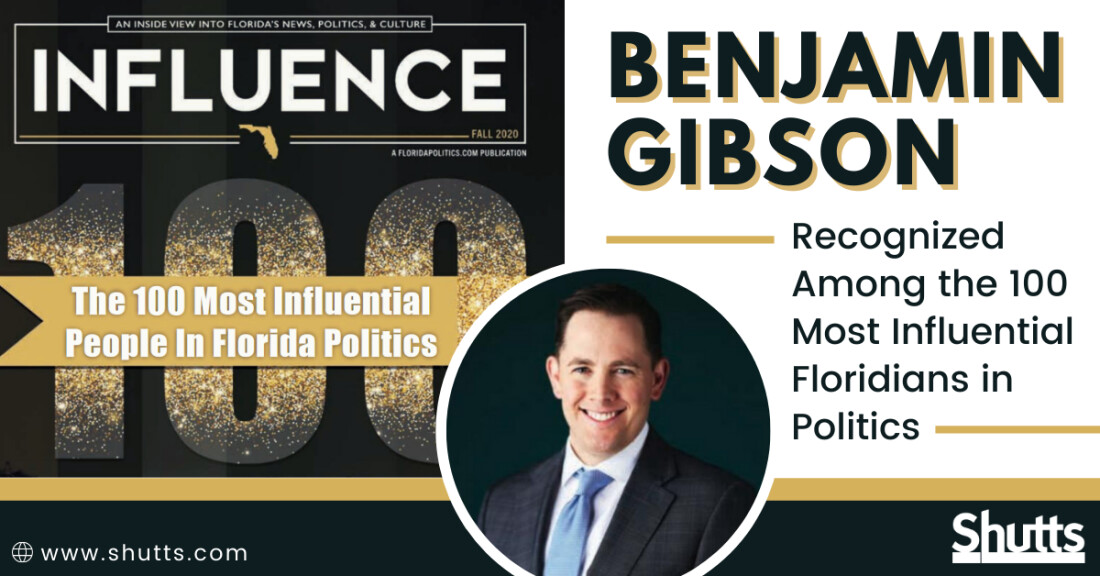 Shutts & Bowen LLP is pleased to announce that Tallahassee partner Benjamin J. Gibson has been recognized in the INFLUENCE 100, INFLUENCE Magazine’s list of the 100 most influential people in Florida politics.

The 2020 edition of the INFLUENCE 100’s honorees include the players, thought leaders, lobbyists, counselors, media, industry leaders and advocates of Florida politics. The list, created by publisher Peter Schorsch, does not include any elected officials or agency heads, instead recognizing the “other masters of the universe” that shape today’s political scene in the state.

The magazine recognizes Ben as the emerging “go-to adviser for the GOP.” In just over a decade, his experience in Florida politics and political law has included service as the Deputy General Counsel and an Assistant General Counsel to Florida Governor Rick Scott for nearly five years, general counsel to the Republican Party of Florida during the last two election cycles, general counsel to Florida Governor Ron DeSantis’ Transition Team, and representation of many prominent state and federal political party committees, campaigns, and political committees. He also serves as Chair of Florida’s First District Court of Appeal Judicial Nominating Commission and as a member of the State Board of Education.

According to attorney Jesse Panuccio, former Acting Associate Attorney General of the United States, “Ben – one of the most dedicated, unflappable lawyers I know – has become a star. His light will shine brightly in Florida legal and political circles for years to come.”

“To be included among so many influential and talented individuals is humbling,” said Ben. “Shutts & Bowen, with its strong Florida statewide presence, has the resources and expertise to handle complex political law issues—from litigation to campaign finance compliance to regulatory matters.  I am proud to be part of such a great team that works tirelessly to provide excellent legal services to our political law clients.”

Ben Gibson is a partner in the Tallahassee office of Shutts & Bowen LLP, where he is Vice-Chair of the Appellate practice group. Ben represents clients facing high-stakes legal issues at the intersection of business, politics, and government. His statewide practice focuses on representing corporate, political, and government clients in appellate, litigation, and administrative matters as well as government affairs. Ben regularly counsels political candidates, party committees, corporate, and nonprofit entities on navigating and complying with the complex federal, state, and local laws that govern their political activity. He represents clients in administrative and enforcement matters before the Federal Election Commission, Florida Elections Commission, and the Florida Commission on Ethics. Ben frequently advises public officials, government agencies, and corporate entities on compliance with Florida’s complex Ethics Code and gift laws, financial disclosure, public records, sunshine law, and Florida Attorney General investigations.