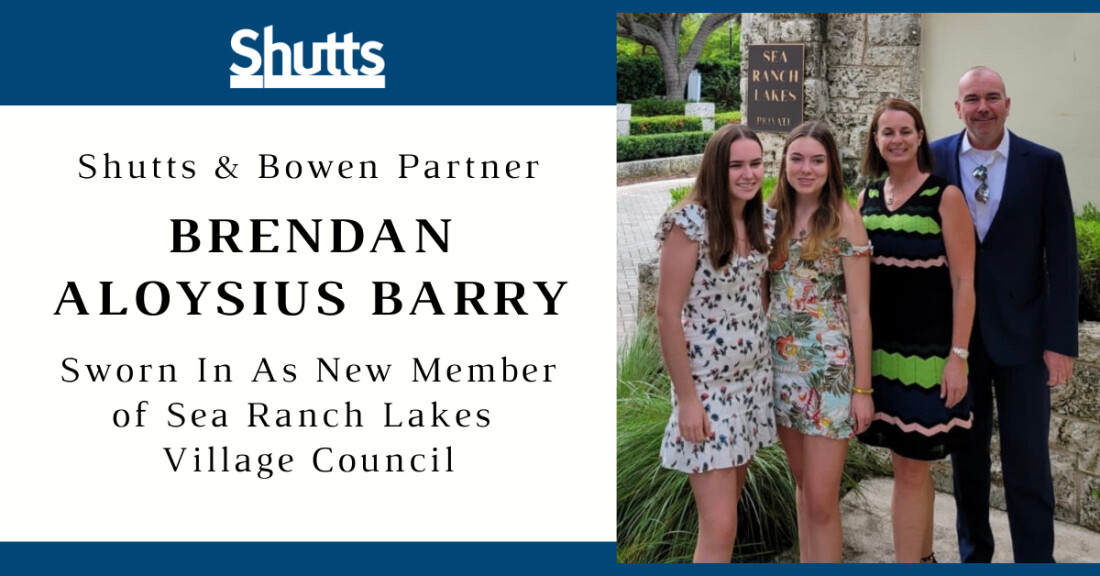 Brendan Aloysius Barry, a partner in the Fort Lauderdale office of Shutts & Bowen LLP, was appointed to the Sea Ranch Lakes Village Counsel in a swearing-in ceremony on Wednesday, November 25, 2020. In addition to local leaders, Brendan was joined by his family as well as United States Congressman Brian Mast (the representative for Florida’s 18th congressional district) who oversaw the ceremony.

Sea Ranch Lakes leadership includes seven Village council members and one mayor. In his role, Brendan will have a wide range of duties, including providing oversight of Village employees, proposing and passing the annual Village budget, and being responsive to Village residents. While the Mayor serves as the executive officer, the Village Council acts as the municipality's legislative body.

The Village of Sea Ranch Lakes, incorporated in October 1959, was the vision of Robert H. Gore for a simple and secure beachside community. The private community is bordered on the east by the Atlantic Ocean, the Intracoastal Waterway to the west, and by Lauderdale-by-the-Sea to the north and south. It has two interior lakes, Lake Seneca and Lake Cayuga. The Village encompasses not only the residential neighborhood, but the Sea Ranch Lakes Plaza at the south end of the Village. It’s patrolled by the Sea Ranch Lakes Police Department. Exemplifying the old Florida ideals of community and family, the Village has a population of approximately 680.

“It is an honor to serve Sea Ranch Lakes residents as a member of the Village Council,” said Brendan. “I’ve always had an interest and passion in community service and am grateful for the opportunity to work with my neighbors.”

In addition to the Village Council, Brendan also serves as a Board Member of the Port Everglades Association, Fish Florida and New York Law School Alumni Association. He previously served on the Pinecrest School Board of Advisors and on the Audit Committee of the Broward County Public Schools.

Brendan is a Martindale-Hubbell AV® rated attorney. He has been recognized by Florida Super Lawyers in Mergers and Acquisitions and is Florida Bar Board Certified in Real Estate. He represents owners, developers and lenders in the acquisition, development, finance, leasing and disposition of corporate assets and commercial real estate and has extensive experience in securitized finance, syndications, workouts, restructures, and foreclosures.

He received his J.D. from New York Law School and his B.A. from Florida Atlantic University.