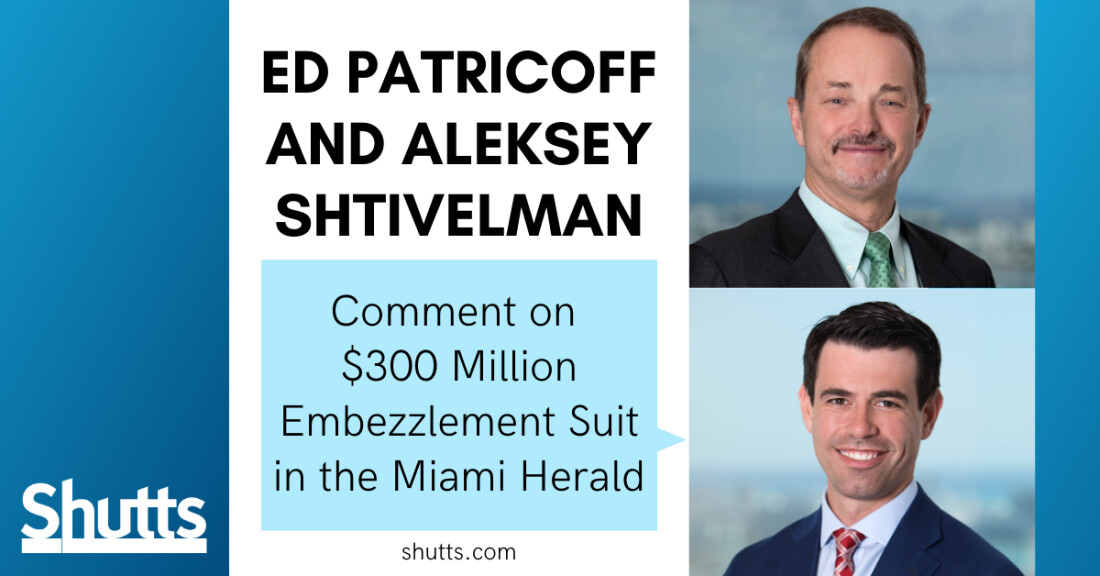 Following a Complaint filed in the Southern District Court of Florida on January 4, 2021, by Miami partners Harold “Ed” Patricoff and Aleksey Shtivelman, the Miami Herald outlined the saga surrounding a $300 million lawsuit against the National Bank of Ukraine alleging a massive embezzlement and money laundering operation.

The Miami Herald’s coverage of the suit includes details surrounding the alleged embezzlement scheme, alleged involvement from the former president and vice prime minister of Ukraine, as well as supporting commentary from Patricoff and Shtivelman. The Complaint alleges that Ukraine’s central bank was complicit in the scheme and actively participated in an operation to deplete a private bank’s funds.

The civil lawsuit filed in the Southern District of Florida in January alleges that Serhiy Kurchenko, a Ukrainian oligarch, illegally acquired BrokbusinessBank (“Brokbank”), a Ukrainian financial institution, siphoned off its clients’ money and laundered it through various companies and entities, including through Ihor Kolomoisky, a “scandal-plagued Ukrainian oligarch.”

According to Patricoff and Shtivelman, the civil allegations are supported by criminal proceedings already underway involving the alleged embezzlement.

Seeking over $300 million in damages is the Plaintiff, Oleg Zhukovskiy, all legal rights to pursue the legal claims to recover damages relating to certain deposits which were made during a then-solvent bank between 2012 and 2013,  only for the bank’s funds to be depleted and the bank to close in 2014.

“Mr. Kurchenko stole our client’s funds and Mr. Kolomoisky stole part of those funds from Mr. Kurchenko,” said Patricoff, Co-Chair of Shutts & Bowen’s International Dispute Resolution Practice Group, referring to the allegations laid out in the civil suit. “In addition, Mr. Kurchenko and Mr. Kolomoisky worked together as partners, and the Plaintiff’s Funds were laundered through their joint network of companies. We intend to reach out to the FBI and DOJ.”

The Complaint claims the embezzlement scheme was set in motion when a bad actor used several shell companies to buy BrokBank without required state approval, ultimately siphoning money out of the 16th biggest bank in Ukraine using the various companies, as well as co-conspirators in Miami. Also listed among the Complaint are allegations of conspiracy to commit fraud, fraud, unjust enrichment and conversion counts against the National Bank of Ukraine.

Harold Edward “Ed” Patricoff, Jr. is a partner in Shutts & Bowen’s Miami office, where he heads the firm’s International Dispute Resolution Practice Group. Named one of South Florida’s “Most Effective Lawyers” by the Daily Business Review in the Business/Complex Litigation category, Patricoff is recognized as one of the preeminent international commercial litigators in his industry. Patricoff is a Martindale-Hubbell AV® rated veteran litigator who represents clients in disputes across multinational borders. Patricoff is widely known for his experience in domestic and international fuel sales, supply and distribution and the power generation industry. He serves as outside counsel for an international power generation supplier and a global distributor of aviation, marine and diesel fuel.

Aleksey Shtivelman is a partner in the Miami office of Shutts & Bowen LLP, where he is a member of the International Dispute Resolution Practice Group. Aleksey focuses his practice on counseling companies and individuals doing business across borders. He specializes in complex dispute resolution, commercial arbitration, and international litigation. Originally from Odessa, Ukraine, he is a native Russian speaker, fluent in Spanish, and adeptly represents clients who conduct business in those languages. Aleksey has been recognized as one of South Florida’s “Most Effective Lawyers” by the Daily Business Review in the Business/Complex Litigation category and as a Rising Star by Super Lawyers.