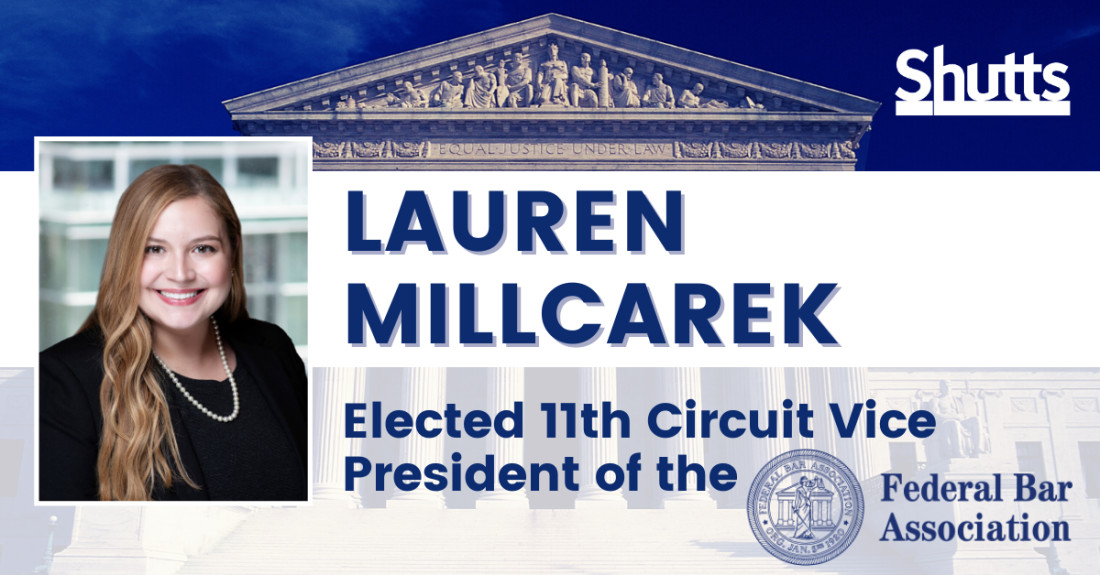 Shutts & Bowen LLP is pleased to announce that Orlando attorney Lauren L. Millcarek has been elected as Vice President for the 11th Circuit of the Federal Bar Association (FBA), with her term to begin in October 2020.

In her position as Vice President of the 11th Circuit, Lauren with be responsible for overseeing all FBA chapters in Florida, Georgia, and Alabama, as well as attending FBA National board meetings. Founded in 1920, the FBA is and their more than 18,000 members are dedicated to the advancement of jurisprudence, acting as the “catalyst for communication between the bar and the bench.” The Circuit Vice Presidents of the FBA are an integral part of the organization’s circuit structure, with two corresponding Vice Presidents per circuit. The circuits are the same as the 12 Federal Judicial Circuits and encompass the states, territories, and possessions of the United States. While the election will be complete in June, Lauren is now officially running unopposed since the FBA slate deadline has passed.

Lauren finds herself well prepared for her role as a national officer of the FBA, as she currently serves as the Immediate Past President of the FBA Orlando Chapter and as Chair of the Grievance Committee of the Middle District of Florida, Orlando Division. Lauren was FBA Orlando’s youngest Chapter President to ever serve and only its sixth woman President in its half-century long history. She also serves as Treasurer of the Central Florida Association for Women Lawyers.

Lauren L. Millcarek is a senior associate in the Orlando office of Shutts & Bowen LLP, where she is a member of the Business Litigation Practice Group. Lauren focuses her practice on federal court litigation. Lauren is experienced in business and financial services litigation; class action and multidistrict litigation; whistleblower and fraud investigation and litigation; disputes involving debt collection, consumer solicitation, and trade practices; and cases involving theft of trade secrets and confidential information.