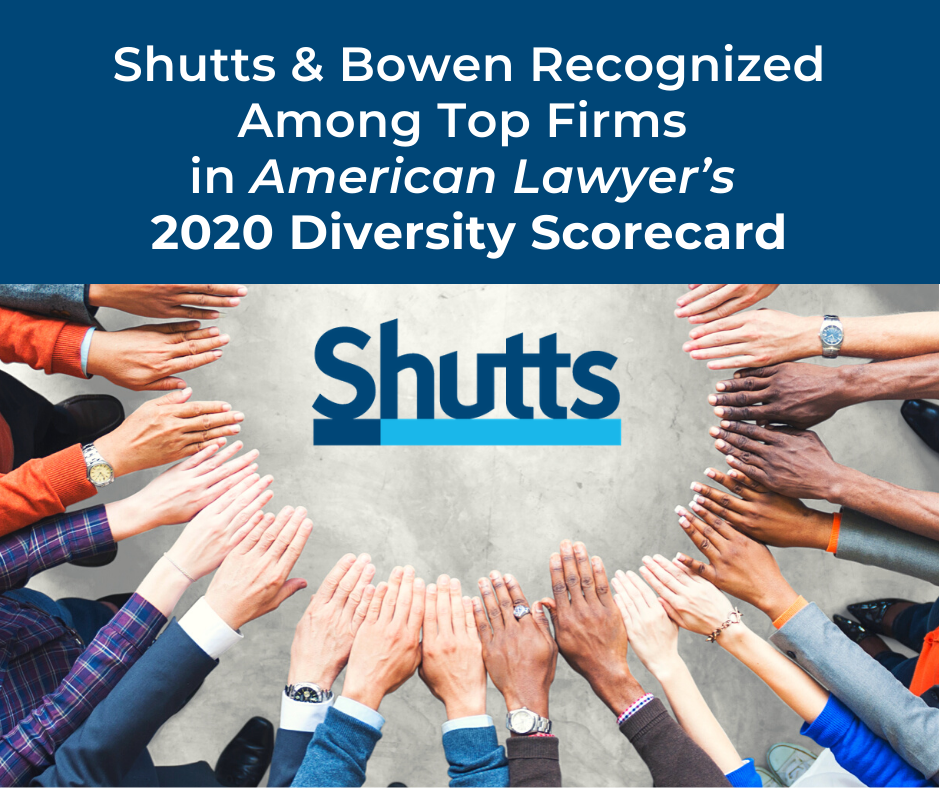 For the eighth consecutive year, Shutts & Bowen has been recognized among the most diverse law firms in the United States by The American Lawyer’s annual Diversity Scorecard, a national ranking of law firms based on the percentage of diverse attorney talent in their offices.

Shutts’ recognition as not only one of the most diverse firms in the country, but also the most diverse Florida-based law firm, comes on the eve of the announcement that former Shutts attorney, Justice Renatha Francis, has made history by becoming the first Caribbean-born judge to sit on Florida’s Supreme Court.

Shutts was ranked No. 27 among law firms nationwide in The American Lawyer’s 2020 Diversity Scorecard, which tracks the average number of full-time-equivalent minority attorneys (both partners and non-partners) at Am Law 200 and National Law Journal 250 law firms. According to the publication, 71 firms in all had at least 20 percent minority attorneys. Since 2010, minority attorneys have seen a 3.9 percent increase in representation among the country’s largest firms.

Commenting on Shutts’ consecutive inclusion in the rankings, Aliette DelPozo Rodz, Chair of the firm’s Diversity Committee, said, “This recognition certifies Shutts’ continuous efforts to achieve diversity in the workplace in order to enhance the creative strength of our legal team, which should reflect the diversity of the communities and clients we serve.”

The annual Diversity Scorecard is one of the best-known benchmarks measuring law firm diversity, tallying and ranking the number of Asian or Asian-American, Black or African-American, Latino or Hispanic, and self-described multiracial partners and associates at Am Law 200 and National Law Journal 250 law firms. To view all the ranked firms, please click here.