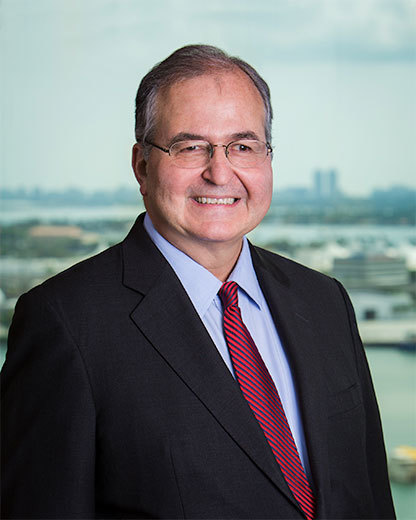 Raul J. Salas, longtime Shutts & Bowen partner, died on February 28, 2019, at age 63 after a long and hard-fought battle with cancer.

Raul was a man filled with joy and kindness, grounded in his Catholic faith, and devoted to his family and his profession. Raul was a humble man who approached people and life with respect, warmth and infectious enthusiasm. Nothing made him happier than to spend time with his wife and two sons, Javier and Jorge.

His unswerving love of baseball led him to coach his sons’ little league teams, which were sponsored by Shutts & Bowen. As his sons advanced in their baseball careers, Raul became their #1 fan and managed to find time to attend most of their games. His son, Javier, has the distinction of having pitched a perfect game as a player for the University of Miami Hurricanes while his brother Jorge broadcast the game on the campus radio station. Raul proudly shared the brothers’ YouTube post-game interview with friends and clients.

Raul’s baseball-based friendship with former Shutts & Bowen partner Stephen L. Perrone led to Raul joining the firm in 1988. Raul was proud to be a partner at Shutts & Bowen, where he practiced for more than thirty years. With a keen interest in international law and extensive experience in US taxation, he traveled throughout Central and South America handling international business transactions and developing a unique set of skills and experience which admirably served his clients throughout his career. He was known for his professionalism and work ethic.

For many years, Raul regularly attended First Friday Mass at Gesu Catholic Church along with a group of co-workers and prominent attorneys, accountants, bankers and members of the judiciary. Following the Mass, they would have lunch and share stories. The collegiality that developed from these encounters developed into life-long friendships.

In his professional life, Raul was an expert in sophisticated fields of tax planning and business transactions, and a devoted, creative and fierce advocate for his many U.S. and foreign corporate and individual clients. He was rated “AV Preeminent” by Martindale-Hubbell, the highest rating an attorney may receive from his peers, and an active member in numerous professional organizations, including the American and Florida Institutes of Certified Public Accountants, Inter-American Bar Association, and the Miami International Tax Group. He also previously served in the Executive Council of the Tax Section of The Florida Bar.

“He was so smart and so passionate about the clients he served, and a joy to work with on transactions,” said Patrick L. Murray, a consultant and international lawyer who worked with Salas at Shutts for more than 40 years. “Even when we would have a disagreement about the solution to a client’s problem, our friendship and respect for each other was so strong that we always laughed about it later.”

As a former Chairman of the Tax and International Law Practice Group at Shutts & Bowen, Raul mentored many lawyers with great energy, humor, generosity, and a wickedly precise & critical red pen. He built a strong department of experts in a wide range of international matters and was the go-to sounding board for structuring complex international transactions, investments, and joint ventures. Francis E. “Frank” Rodriguez, Co-Chair of the Tax and International Law Practice Group, remembers Salas as a strong mentor and a role model for every lawyer to emulate.

“It’s a huge loss not only for our firm, but also the legal profession and greater Miami community which he loved,” Rodriguez said. “Raul’s unquestionable integrity, honesty, and insight into human nature, combined with his intelligence and expertise, made him a consummate professional on every level. We will always be grateful for the ‘can-do’ spirit that he generously shared with those who had the privilege of working with him, and our department will miss him greatly.”

Michael J. “Micky” Grindstaff, Firm-Wide Managing Partner, said the firm was taking Salas’ loss hard. “We’re deeply saddened by his passing, he meant so much to us as an attorney and a person,” Grindstaff said. “He was a top-notch professional and a dedicated partner who truly cared about the law and the success and congeniality of our firm. That was his life’s work.”

During the last few years, Raul’s attitude and actions in the face of his illness demonstrated to everyone around him the true meaning of courage, faith, honesty, professionalism, and unselfishness.He continued to work at Shutts’ Miami office until his final days. He was a shining example of living life to the fullest, with grace and humility.

Raul is survived by his wife Aurora; his sons Javier and Jorge; father Frank; and his siblings Frank Jr., Albert, Jimmy, Joe, Lucy, and Mary.