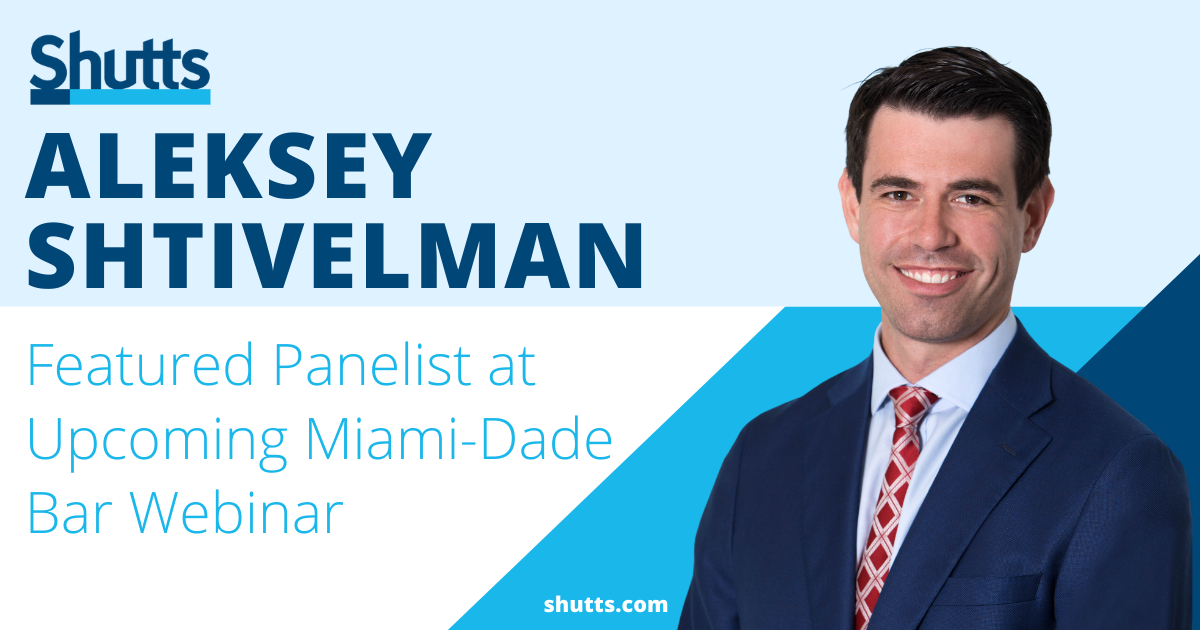 Miami partner Aleksey Shtivelman will be a featured speaker at the upcoming Miami-Dade Bar webinar “Emerging Legal and Humanitarian Issues Resulting from the Crisis in Ukraine.” The Zoom webinar will be on Wednesday, April 6, starting at 11:00 a.m. until 1:00 p.m. EST.

The informative discussion with talk about the impact and legality of worldwide sanctions and boycotts, the targeting of Russian oligarchs’ real estate and other assets, legal issues which have arisen following the commencement of hostilities in Ukraine, and the immigration and humanitarian issues resulting from the dislocation of over 3,000,000 Ukrainians from their homeland.

Please click here for more information or to register.

Aleksey Shtivelman is a partner in the Miami office of Shutts & Bowen LLP, where he is a member of the International Dispute Resolution Practice Group. Aleksey focuses his practice on counseling companies and individuals doing business across borders. He specializes in complex dispute resolution, commercial arbitration, and international litigation, including simultaneous proceedings in multiple jurisdictions, such as the United States, United Kingdom, British Virgin Islands, Ukraine, the Russian Federation, as well as other countries across Latin America, Africa, Europe, and the Middle East. Originally from Odessa, Ukraine, he is a native Russian speaker, fluent in Spanish, and adeptly represents clients who conduct business in those languages. Aleksey has been recognized as one of South Florida’s “Most Effective Lawyers” by the Daily Business Review in the Business/Complex Litigation category and as a Rising Star by Super Lawyers.