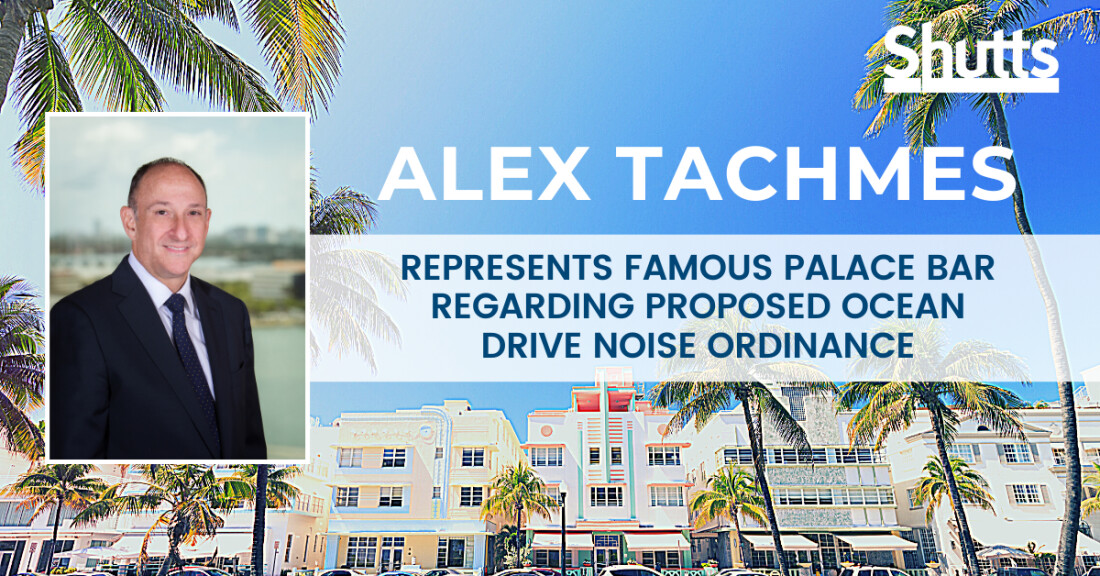 According to RE:MiamiBeach, a new noise ordinance proposed as part of an effort to clean up Ocean Drive could put establishments like Miami Beach’s The Palace out of business.

In July, Miami Beach Mayor Dan Gelber proposed a series of ideas regarding the City’s entertainment district in South Beach. Following the Mayor’s initial proposal, City staff came up with a package of proposals, including an ordinance that would remove the noise exemption to the east for the blocks between 9th and 11th Streets on Ocean Drive, impacting four businesses including The Palace, the Clevelander, and Ocean’s 10.

Miami partner Alexander Tachmes represents three of the four impacted businesses. He pointed out to RE:MiamiBeach that the exemption was first put in place to allow music to travel to the east in those two blocks because “the desire of the Commission was to cultivate the outdoor entertainment establishments between 9th and 11th.”  Removing the noise exemption would basically make it “impossible for the Palace Bar to have its outdoor entertainment on the sidewalk ... like it has done for many years.”

“It’s an iconic bar, iconic establishment,” Alex said. “If you remove the exemption going eastward, it will basically kill the Palace Bar and their ability to have outdoor entertainment.”

Alexander I. Tachmes is a partner in the Miami office of Shutts & Bowen LLP, where he is Chair of the Land Use and Government Relations Practice Group and a member of the Real Estate Practice Group. A Martindale-Hubbell AV® rated attorney, Alex concentrates his practice on governmental matters, including land use and zoning, public-private transactions, competitive bidding and lobbying, and commercial real estate transactions, including hospitality matters.