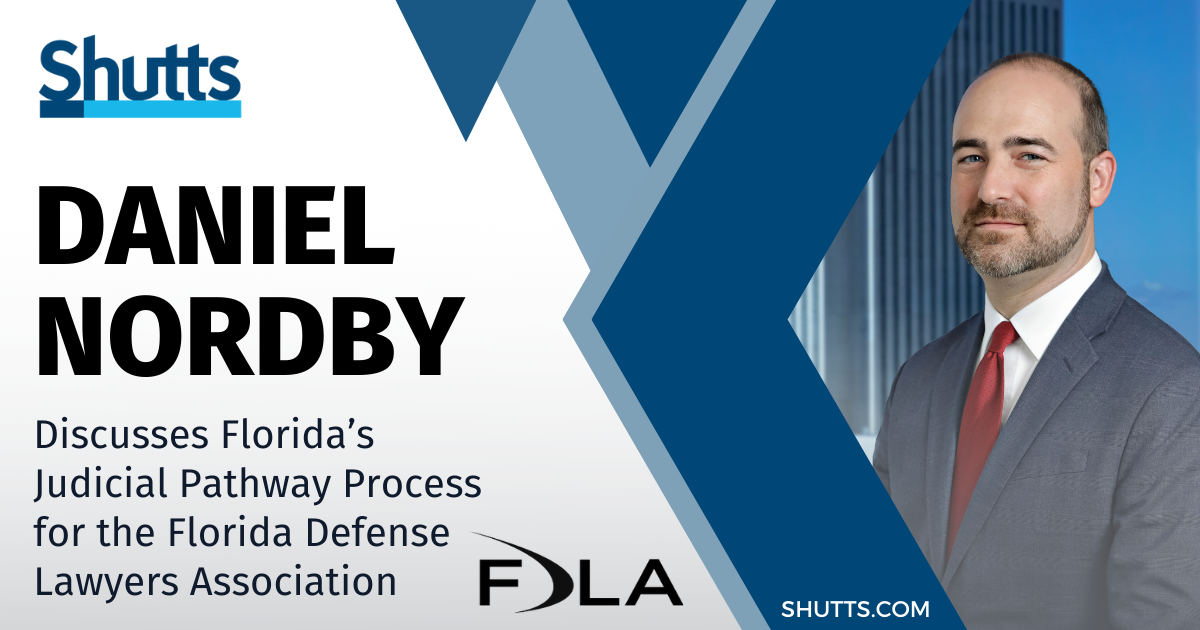 Daniel Nordby, a partner in Shutts & Bowen LLP’s Tallahassee office, participated as a panelist during a 1-hour CLE presentation for the Florida Defense Lawyers Association on January 11, 2022.

The “Judicial Pathways” panel discussed Florida’s judicial nominations and the appointment process. The panel featured three experts, including Daniel, who is a former General Counsel to the Governor and Chair of the Florida Supreme Court JNC, as well as a former Chair and current member of the 4th Circuit JNC, and a third panelist who is a member of the 18th Circuit JNC.

The Florida Defense Lawyers Association is a voluntary bar association that was formed in April 1967 to represent the interests of Florida lawyers whose primary focus was the defense of civil matters. FDLA’s nearly 1000 members include attorneys from private law firms, public agencies, and in-house corporate counsel.

Daniel Nordby is a partner in the Tallahassee office of Shutts & Bowen LLP, where he is a member of the Appellate Practice Group. His practice focuses on high-profile, high stakes matters of law and public policy, particularly in the areas of constitutional, appellate and administrative law. Over the course of his career, Daniel has developed extensive experience in the area of government and administrative law. He is Florida Bar Board Certified in State & Federal Government & Administrative Practice, is a Past Chair of the Florida Bar’s Administrative Law Section, and has served on the Section’s Executive Council for more than a decade. Daniel has represented clients in some of Florida’s largest competitive procurements and has served as counsel of record in a variety of administrative and judicial proceedings involving the application of constitutional and administrative law principles.