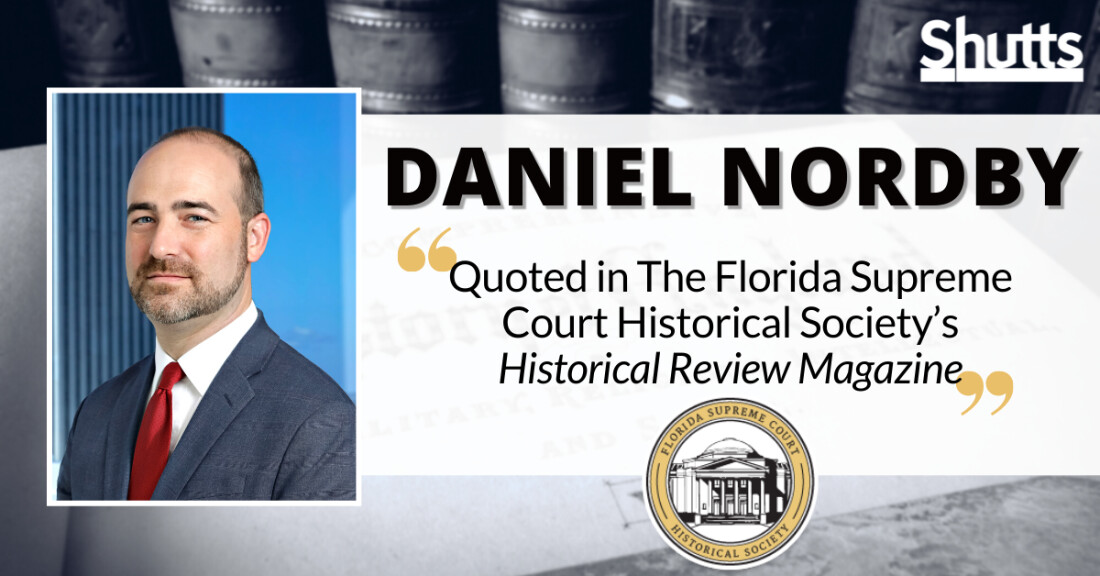 Daniel, who currently serves as a gubernatorial appointee to the Florida Supreme Court Judicial Nominating Commission, was also involved with the vetting process leading to the prior appointments of Justice Grosshans to the county and district courts. In Historical Review Magazine’s article, “Meet the Newest Supreme Court Justice: Jamie R. Grosshans,” Daniel comments on her past appointments and her future in the judiciary.

“During her time on the Orange County Court and Fifth DCA, Justice Grosshans developed a reputation as a fair and principled jurist,” said Daniel. “I am confident that she will bring those same qualities to her new role. I look forward to her service on the Florida Supreme Court for decades to come.”

Historical Review Magazine is published twice a year by the Florida Supreme Court Historical Society. The Florida Supreme Court Historical Society works to save and maintain for future generations the records of the people and events that have shaped the evolution of Florida’s court system from the early 1800s, through the 21st Century, and beyond. The Society is committed to making sure people understand the importance of a strong, independent judiciary in our governmental balance of power.

Daniel Nordby is a partner in the Tallahassee office of Shutts & Bowen LLP, where he is a member of the Appellate Practice Group. He is Florida Bar Board Certified in State and Federal Government and Administrative Practice. His practice focuses on high-profile, high stakes matters of law and public policy, particularly in the areas of constitutional, appellate and administrative law. Over the course of his career, Daniel has developed extensive experience in the area of government and administrative law. He is a Past Chair of the Florida Bar’s Administrative Law Section and has served on the Section’s Executive Council for more than a decade. Daniel has represented clients in some of Florida’s largest competitive procurements and has served as counsel of record in a variety of administrative and judicial proceedings involving the application of constitutional and administrative law principles. A representative list of Daniel’s reported opinions in the state and federal courts is available here.