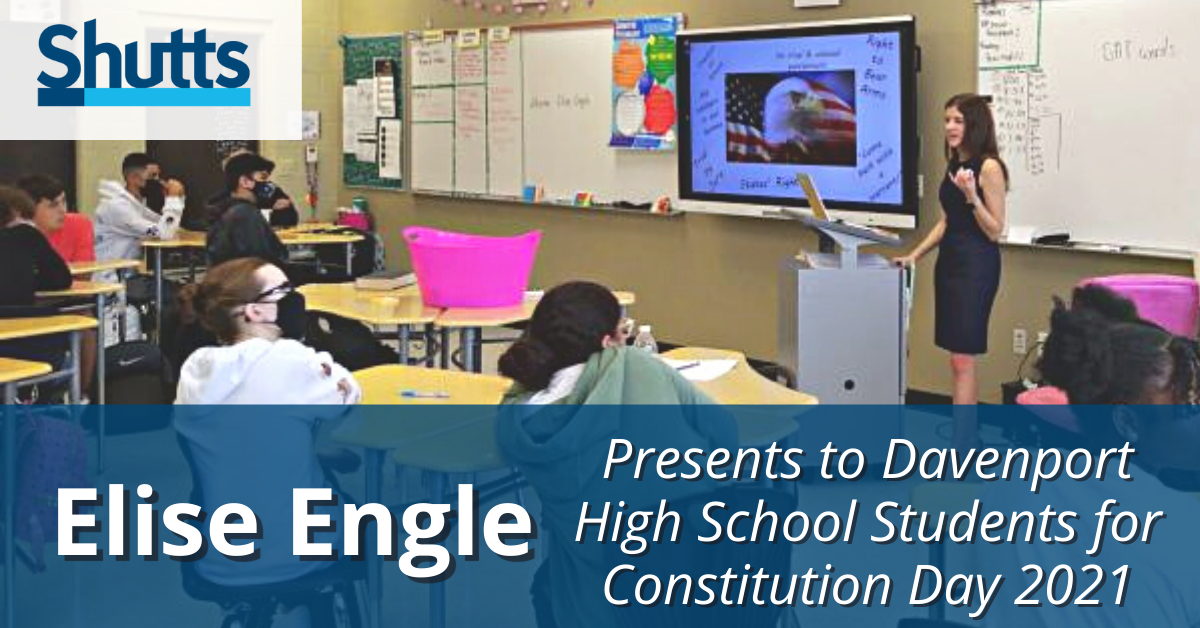 Elise Engle, an appellate attorney in the Tampa and Tallahassee offices of Shutts & Bowen, recently presented to students at Davenport High School for Constitution Day 2021, an educational program by the Bill of Rights Institute commemorating the anniversary of the signing of the U.S. Constitution.

On September 17th, Elise spent her day at Davenport High School speaking with eleventh grade students about the of separation of powers and our system’s checks and balances, while highlighting the importance of the Constitution, Bill of Rights and the rights of the American people. Elise participated in 2021’s Constitution Day programming through the Bill of Rights Institute, presenting to what will be the first class to graduate from the newly opened Davenport Highschool.

Constitution Day commemorates the signing of the U.S. Constitution on September 17, 1787 by the delegates to the Constitutional Convention in Philadelphia. Publicly funded educational institutions and federal agencies celebrate the day by providing educational programming about the history of the Constitution. Founded in 1999 to engage, educate, and empower individuals with a passion for the freedom and opportunities that exist in a free society, the Bill of Rights Institute is a 501(c)(3) nonprofit organization with a network of over 50,000 history and civics educators, thousands of classroom-ready history and civics resources and annual student and teacher programming.

Elise Engle is an attorney in the Tampa and Tallahassee offices of Shutts & Bowen LLP, where she is a member of the Appellate Practice Group. Elise focuses her practice on appellate litigation, civil appeals and trial support in both state and federal courts. She was most recently a judicial law clerk for the Honorable Jamie R. Grosshans at the Florida Supreme Court, following a clerkship with the Honorable John L. Badalamenti at the United States District Court, Middle District of Florida.