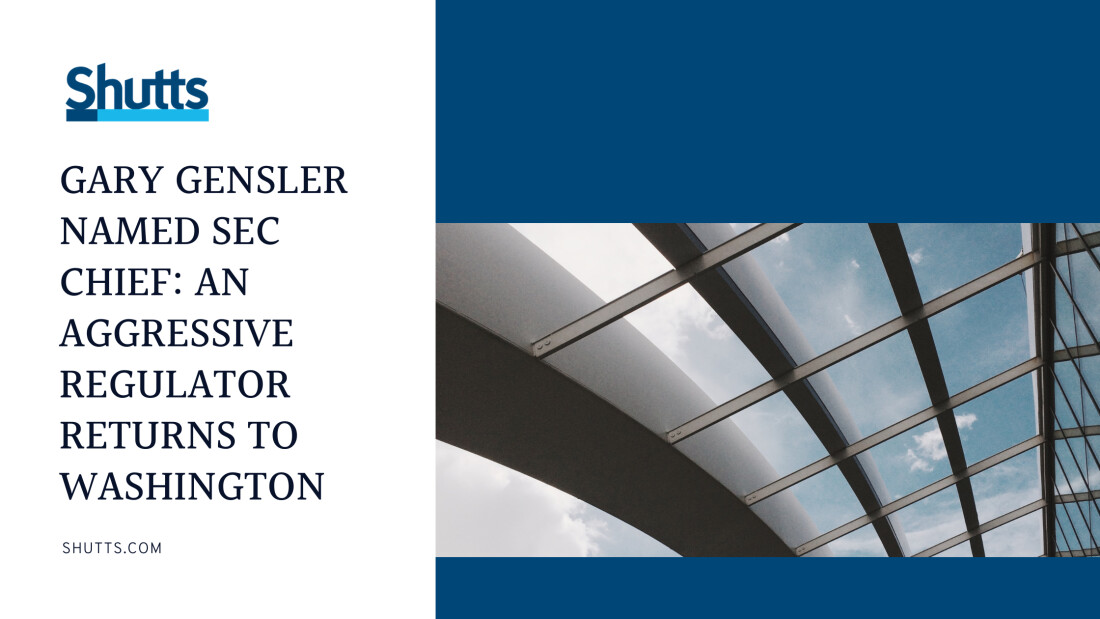 This article originally appeared on the Daily Business Review on February 9, 2021.

On January 18, 2021, the Biden administration announced the nomination of Mr. Gary Gensler as the next chairman of the United States Securities and Exchange Commission (the “SEC”). Gensler succeeds Jay Clayton, a prominent Wall Street lawyer who reduced regulation of the financial services sector and was generally perceived to be a friend of the financial industry.

“Gary Gensler and I worked together after the 2008 crisis to hold Wall Street accountable. He is a tenacious regulator who stood up to the industry titans to rein in their risky behavior. He will be an excellent SEC Chair during this economic crisis.”

“For too long, our banking regulators have behaved like they work for the financial institutions they regulate – not the American people. But big change is coming. President-elect Biden couldn't have made [a] better [pick] to lead the SEC…Gary Gensler…”

As of this writing, Mr. Gensler’s nomination is pending confirmation by the Senate.

Gensler, 63, has spent most of his career in the financial services sector. Gensler began his career at Goldman Sachs, where he worked in a variety of areas over his 18-year tenure, including mergers & acquisitions and fixed income and currency trading. Following his time at Goldman, Gensler transitioned into public service, holding various positions including Assistant Secretary for Financial Institutions (1997-1999) and Undersecretary for Domestic Finance (1999 to 2001) at the United States Department of the Treasury. Gensler also served as a senior advisor to Senator Paul Sarbanes, the chair of the Senate Banking Committee, who spearheaded the Sarbanes-Oxley Act (2002), which was designed to promote investor protection by regulating corporate accounting and governances practices in the wake of a series of accounting and corporate scandals in the late 1990s.

Gensler also served as the Chairman of the U.S. Commodity Futures Trading Commission (the “CFTC”) under President Obama from 2009-2014, where he worked to implement a regulatory framework to oversee the massive, previously unregulated and opaque derivatives market – which many commentators have opined was a principal cause of the 2008-2009 financial crisis. Gensler also assisted with the implementation of the Dodd-Frank Wall Street Reform and Consumer Protection Act (2010), which further regulated the derivatives market and bank securities activities.

One of the most notable feathers in Gensler’s regulatory cap during his time at the CFTC was his probe of financial institutions that engaged in the manipulation of LIBOR – the London Interbank Offered Rate. Mr. Gensler’s regulatory initiative struck at a scandal that affected trillions of dollars of financial transactions that use LIBOR as the benchmark interest rate. While Gensler’s investigation resulted in the financial institutions in question paying billions of dollars in fines and penalties, the ultimate result of Gensler’s efforts has been a global, market-wide effort over several years to transition away from LIBOR entirely, to alternative benchmark interest rates that are more transparent and less susceptible to manipulation.

Following Gensler’s tenure at the CFTC, which ended in 2014, Gensler has been teaching at the MIT Sloan School of Management. His research and teaching activities have focused on blockchain technology, digital currencies, financial technology and public policy.

During 2018, Gensler was appointed chair of the Maryland Financial Consumer Protection Commission, which prepared a report recommending that Maryland enact legislation requiring that financial professionals giving investment advice – including broker-dealers, broker-dealer agents, insurance producers, investment advisers, or investment adviser representatives – adhere to a strict fiduciary duty standard to act in the best interests of their customers without regard to financial or other interests of the person or firm providing the advice. This standard would apply equally to investment advisers and broker-dealers. Notably, this commission’s report acknowledged that the SEC’s Regulation Best Interest, which had not yet been adopted at the time, “largely preserve[s] the status quo,” and that it fell to individual states to provide greater protections that investors would expect from their financial advisors.

Tougher Regulation Ahead – With A Special Focus On FinTech

Gensler’s background and track record suggest that the Biden administration intends to signal a “get tough” regulatory stance toward Wall Street with Gensler’s nomination. Notwithstanding Gensler’s tenure within the industry, the financial services sector should expect Gensler to attempt to restore diminished regulations and support strong, focused regulations that promote transparency and efficient market operation – and therefore increase regulatory compliance burdens – in the name of investor protection. Gensler has made no secret of his views. In interviews and public remarks, he has indicated that transparency and efficiency in the markets are his central concerns, because they are “rules of the road” that ultimately allow market participants to prosper. In Gensler’s view, markets need “referees” to ensure that people have confidence in the markets, although he acknowledges that Wall Street may not always like what regulators do.

Gensler’s public-service experience at the CFTC suggests that Gensler believes in the importance of regulating new and emerging financial technologies, while balancing the need for growth and innovation. Consistent with this view, Gensler remarked during his time as a professor at MIT in April, 2019, that early-stage financial technology startups should be put in a “regulatory sandbox,” to promote innovation and prevent overly burdensome regulation from stifling growth when firms are small. However, this does not mean that Gensler thinks that financial technology firms should be given free reign. Gensler stated in an interview with Bloomberg last October that blockchain technology – the most notable application of which is cryptocurrency, such as Bitcoin – has the potential to be a catalyst for change in the financial sector, but that the application of the technology in the cryptocurrency space must be regulated either by the SEC or the CFTC. He also made clear that in order to ensure investor protection, confidence and growth, cryptocurrencies may need more regulation than commodities such as oil, corn and wheat – possibly signaling his view that the SEC is the appropriate regulatory agency for cryptocurrencies. In this regard, Gensler has also gone on record with his view that some cryptocurrencies may be classified as securities, which would bring them within the SEC’s regulatory responsibility.

Gensler’s work with the Maryland Financial Consumer Protection Commission suggests that Gensler does not believe that the current iteration of Regulation Best Interest provides sufficient investor protection when investors seek advice from financial professionals. Gensler’s probe of LIBOR manipulation suggests that is willing to examine established Wall Street practices and pursue strong regulatory measures to hold market participants accountable for any past impropriety. In this way, Gensler has demonstrated his resolve to take strong actions even if they result in a wholesale change in the way financial markets operate, in the name of enhancing investor protection and transparency. As a result of Gensler’s outlook, the securities industry should prepare for heightened regulatory focus on Regulation Best Interest, either through the form of additional rulemaking or robust enforcement actions focusing on compliance with this relatively new rule.

Increased Enforcement Activity On the Horizon

Gensler’s well-established views on regulation and investor protection, coupled with his track record at the CFTC, strongly suggest that a greater emphasis on enforcement will be coming to the SEC under Gensler’s watch. The financial services industry would be well advised to tread lightly during Gensler’s tenure as chairman of the SEC, which will likely be marked by increased surveillance and investigatory activity, and aggressive enforcement initiatives, that will be anything but a free pass for financial firms.

Bryan Wells and Peter Rahaghi are partners in the financial services practice group of Shutts & Bowen. They can be reached at BWells@shutts.com and PRahaghi@shutts.com.