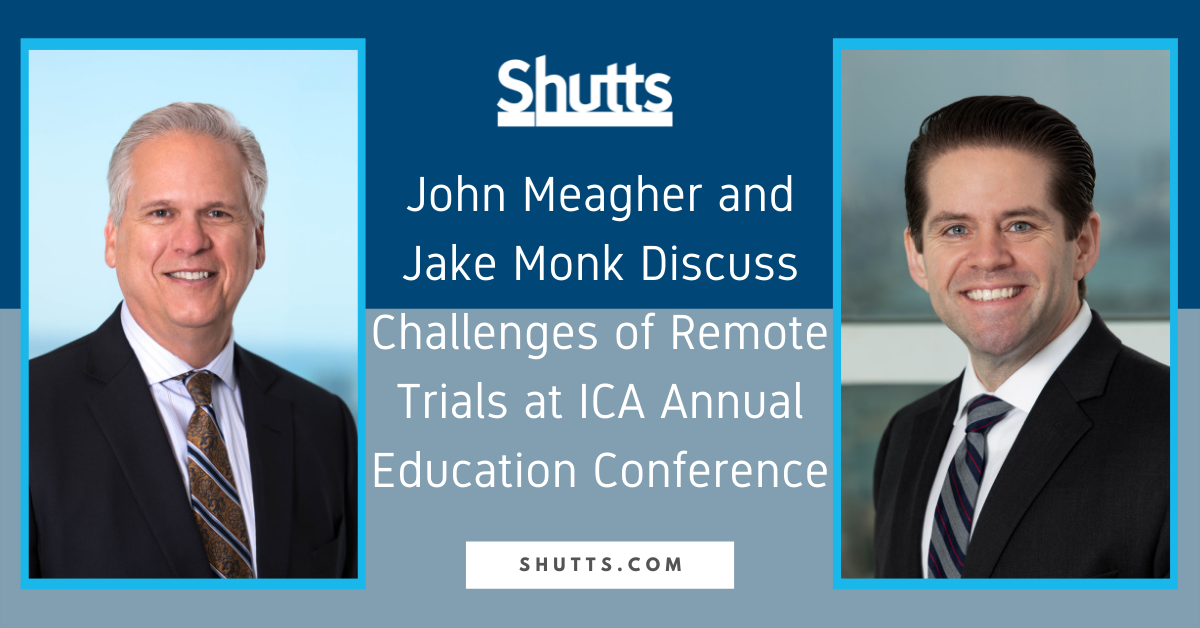 In what was one of the most heavily attended programs of the event, John – who also serves as Managing Partner of Shutts’ Miami office and Chair of the Insurance Practice Group – joined Jake in describing the complex challenges associated with their historic victory litigating Florida's first federal jury trial conducted entirely through Zoom in which they secured a defense verdict on a $4,000,000 life insurance policy for an insurer. The case involved a rescission action based on material misrepresentations on the application for coverage by a disbarred attorney who continued in the unlicensed practice of law, sanctions against the beneficiary and her counsel during litigation, and a trial on whether the disbarred attorney's death was suicide by acetaminophen overdose.

In the groundbreaking trial, even the jurors participated in the proceedings through Zoom from their homes. In their presentation at the ICA conference, John and Jake provided the audience with a deep dive analysis not only of the facts of their case, but the challenging technical aspects of conducting a virtual trial as well.

Internationally recognized by insurance claim professionals as the premier educational conference in the life and health claims industry, the event has brought claims associates together since 1910. It annually attracts more than 400 claims professionals to engage in high-quality educational workshops providing relevant, timely information and priceless opportunities to connect with their peers.

John E. Meagher is the Managing Partner of the Miami office of Shutts & Bowen LLP and Chair of the Insurance Practice Group. A Martindale-Hubbell AV® rated trial lawyer, John has been recognized as one of the Best Lawyers in America® in insurance law and has been named a “Top Lawyer” by South Florida Legal Guide. John primarily represents insurance companies, defending them in trial and appellate actions throughout the state and federal court systems. John also litigates commercial, real estate, and banking cases.

Jake Monk is a member in the Insurance Law and Appellate Practice Groups. He regularly represents insurance carriers and other corporations in all forms of federal and state trial and appellate matters as well as class actions. He also regularly serves as local counsel for out-of-state firms that have limited presences in Florida.  Before practicing law, Monk worked in IT-healthcare project management and consulting for major hospital systems and regional physician networks. He received his J.D. from the University of Miami School of Law and his B.S. from The Ohio State University.