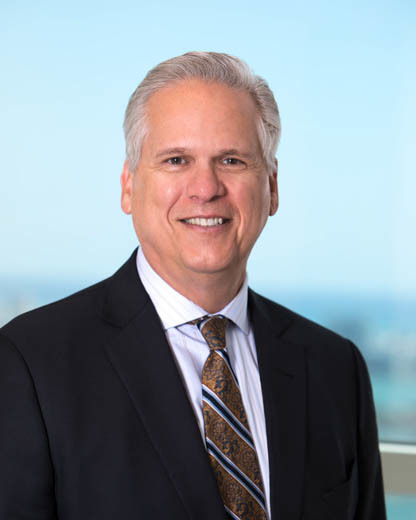 John E. Meagher is the Managing Partner of the Miami office of Shutts & Bowen LLP and Chair of the Insurance Practice Group.

A Martindale-Hubbell AV® rated trial lawyer, John has been recognized as one of the Best Lawyers in America® in insurance law and has been named a “Top Lawyer” by South Florida Legal Guide. John primarily represents large insurance companies, defending them in trial and appellate actions throughout the state and federal court systems. John also litigates commercial, real estate, and banking cases.

In the insurance context, John has experience defending first, third party, and bad faith claims involving life, health, long term care, and disability insurance litigation. He has handled large, complex cases and numerous jury and non-jury trials for clients such as MetLife, Northwestern Mutual, Unum, and Lincoln Financial Group. A recent jury trial on a large disability insurance policy before a federal Nashville court resulted in a defense verdict for his client, the insurer. In another matter, John represented a national insurer before the Eleventh Circuit Court of Appeals that resulted in a favorable summary judgment under a $2 million life insurance policy. He has argued before the Florida Supreme Court in a case involving far-reaching issues of attorney-client privilege in first-party bad faith claims. He also was lead counsel in a precedent setting case before the Third District Court of Appeals on the issue of whether bad faith claims could be pursued simultaneously with an insured’s breach of contract claim, resulting in lower costs and exposure to insurers throughout the State. John recently tried the first federal court Zoom jury trial in Florida, obtaining a defense verdict in a $4 million life insurance case.

John is a frequent speaker on insurance fraud, trial and deposition preparation, e-discovery, attorney-client privilege, and other litigation topics at meetings of the International Claims Association, the Defense Research Institute, the DI and LTC Insurer’s Forum, the Definitive Disability Conference, and the Eastern and New England Claims Conferences. He's a member of the International Claims Association and the Defense Research Institute.