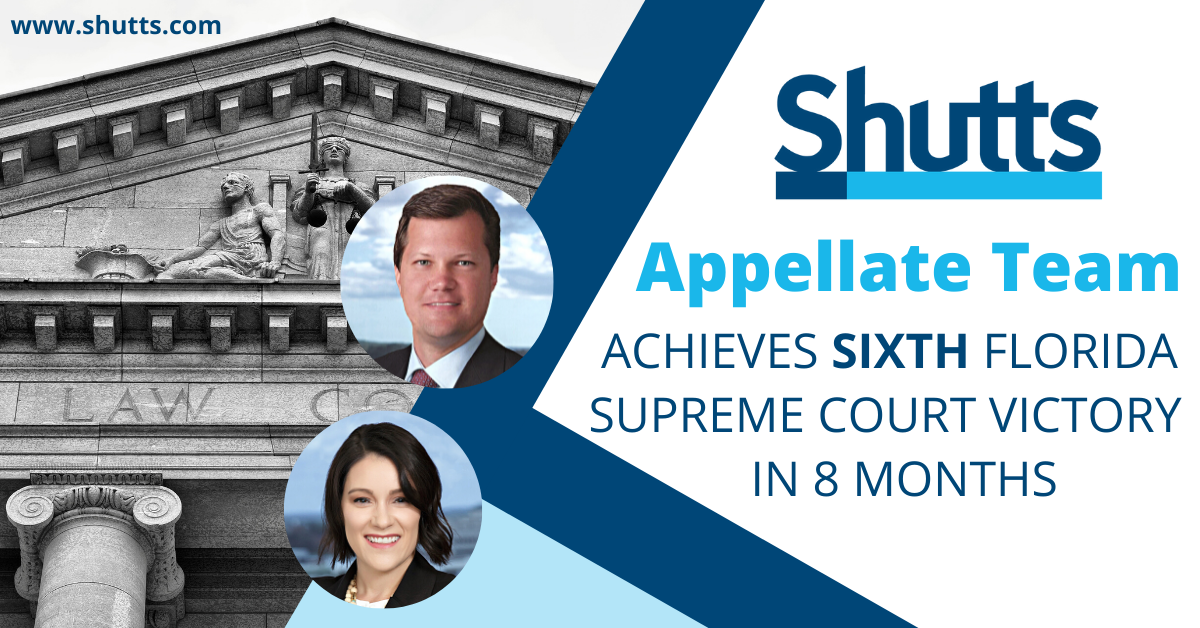 Jason Gonzalez, Chairman of Shutts & Bowen’s Appellate Practice Group and Managing Partner of the Tallahassee office, as well as partner Amber Stoner Nunnally, recently achieved both a victory for their clients as well as the Shutts Appellate Team’s sixth Florida Supreme Court victory in eight months, after successfully advocating for business group clients pushing for reform of abusive lawsuit and discovery tactics.

In an amicus brief filed on behalf of Shutts clients, the U.S. Chamber of Commerce and the Florida Justice Reform Institute, Jason and Amber asked the Court to extend the “Apex Doctrine” to protect leaders of organizations, who are subjected to depositions in lawsuits involving issues about which the executives have no unique or personal knowledge, from abusive discovery. These depositions can be a frequently employed tactic in contentious disputes, often used to intimidate or harass high-level corporate officers.

On August 26, 2021, the Florida Supreme Court granted the request and adopted the Apex Doctrine, amending the Florida Rules of Civil Procedure (Florida Rule 1.280(h)). The rule prevents unscrupulous attorneys from being able to extort unfair settlements by threatening to depose senior corporate executives. The lawsuit abuse, now curtailed by the Court’s ruling, has historically burdened all Floridians in the form of higher prices for goods, services and insurance premiums.

Commenting on the favorable ruling, Jason noted, “This ruling is another positive advancement for the Florida civil justice system.”

“We are catching up with other States in terms of fairness in our courts,” he said. “Ending lawsuit abuse is a win overall.”

Jason Gonzalez is the Managing Partner of the Tallahassee office of Shutts & Bowen LLP and is Chairman of the Firm's Appellate Practice Group. Jason is an experienced appellate and litigation attorney and regularly consults on executive branch government affairs. He represents businesses and state agencies in state and federal courts in contracts, government procurements, insurance disputes, class actions, tort defense, banking, finance, professional licenses and elections matters. Over the course of his career, Jason has been at the forefront of emerging legal developments, helping to shape Florida’s justice system. In 2019, Florida Politics reported that Jason was representing parties in more pending civil cases at the Florida Supreme Court than any other attorney in the State.