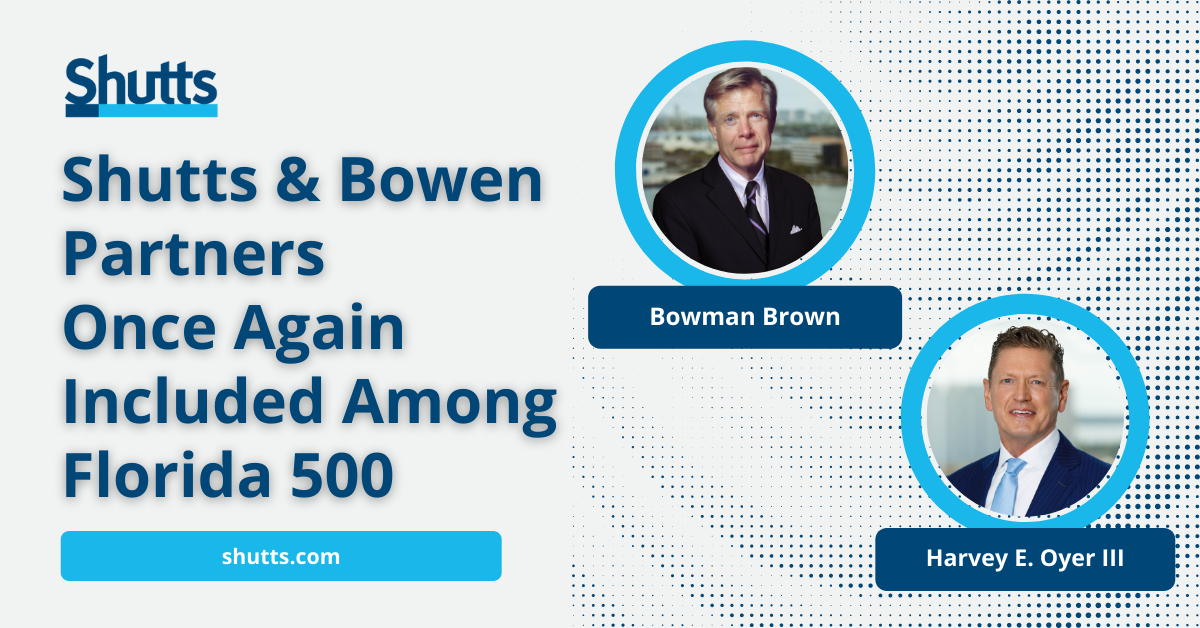 Shutts & Bowen LLP is proud to announce that partners Bowman Brown and Harvey E. Oyer III have once again been recognized by Florida Trend Magazine’s prestigious Florida 500 - a list of influential business leaders throughout the state.

Bowman was listed this year as a “Living Legend,” while Harvey was one of only 38 lawyers included in this year’s edition. Both have been selected all four years that Florida Trend has published the Florida 500.

Florida Trend’s fourth edition of the Florida 500 is a comprehensive list of the state’s most influential business leaders spanning across more than 60 business industries. Florida Trend’s editorial staff engages in a massive initiative which is the result of extensive contacts in regional business circles, hundreds of interviews, and months of research, culminating in a highly selective biographical guide of the people “who really run Florida.” Inclusion is based on broad economic categories from the U.S. Department of Commerce, with the number of influential leaders in each sector roughly proportional to a category’s share of the state GDP.

Bowman Brown is the Chairman of the Shutts & Bowen Executive Committee and Co-Chair of the Financial Services Industry practice group. His practice focuses on the financial services industry and insurance regulatory matters. Over the course of his career, Bowman has been at the forefront of the international legal arena. He has helped transform Florida into an international banking and business center through his efforts to make Florida, and South Florida in particular, the leading location for international banks and businesses targeting Latin America and the Caribbean.

Harvey E. Oyer III is a partner in the West Palm Beach office of Shutts & Bowen LLP, where he is a member of the Real Estate Practice Group. A fifth generation native of Palm Beach County, Harvey is the current Chairman of the Business Development Board of Palm Beach County, a former Chairman of the Chamber of Commerce of the Palm Beaches, and the recipient of the Thomas Jefferson Award for Public Services and the Ellis Island Medal of Honor. He served as a Captain the Marine Corps and was Florida’s Distinguished Author in 2013.