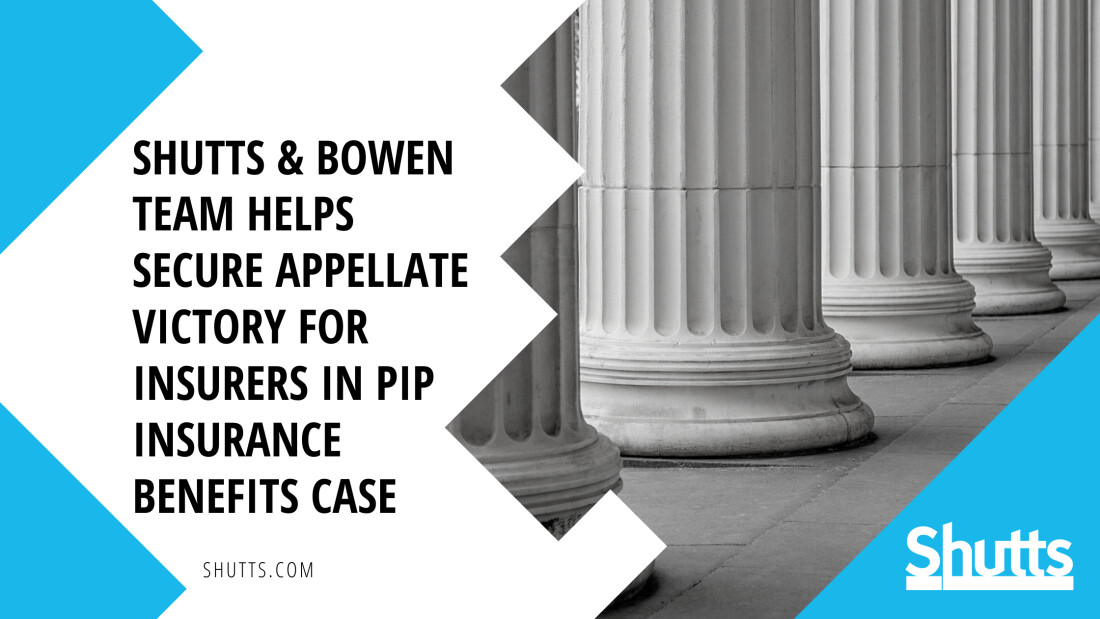 The Fourth District Court of Appeal found insurers aren’t obligated to reimburse medical providers 100% of their charges after a group of South Florida medical providers challenged an insurance company’s interpretation of its car crash coverage.

The appeal involved personal injury protection (PIP) benefits, which cover medical expenses after a Florida car accident, regardless of who was at fault. Trial courts had rejected the providers’ challenge, but certified a question of great public importance to the appellate court, which had to decide whether the insurers’ PIP insurance policy properly limited recovery under a statutory fee schedule.

The Fourth District Court of Appeal sided with the insurers, agreeing that the PIP policy limited reimbursement to 80% of the statutory fee schedule rather than 100% of the medical provider’s charges.

The Shutts and Bowen Team representing insurers in the appeal included Garrett Tozier, who practices in the firm’s Appellate practice group, and former Shutts partner Suzanne Labrit (who was involved with the case before her appointment to the Second District Court of Appeal in July).

About Garrett A. Tozier

Garrett A. Tozier is a senior associate in the Tampa office of Shutts & Bowen LLP, where he is a member of the Appellate practice group. Garrett’s practice includes civil appeals and certiorari proceedings in state and federal courts.  He clerked for the Honorable Susan H. Rothstein-Youakim at the Florida Second District Court of Appeal. Garrett was also a Central Staff Attorney at the Florida Second District Court of Appeal, where he gained extensive experience in appellate jurisdictional matters, appellate motion practice, and original proceedings.