The Proper Use of Opinions by Certified Mediators 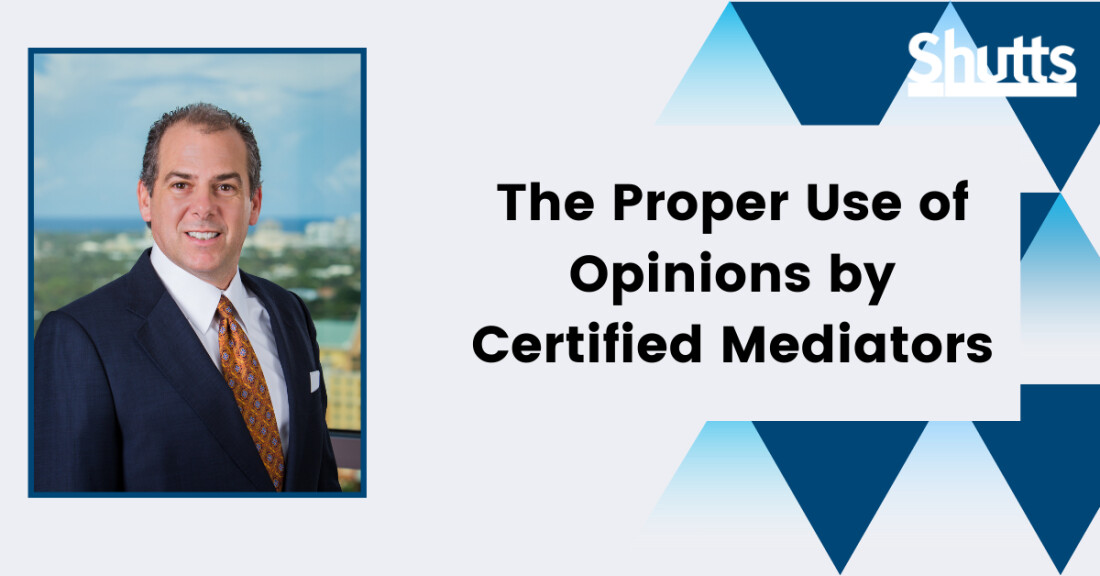 This article originally appeared in the Daily Business Review on October 21, 2020.

Contrary to attorney perceptions, the Florida Rules for Certified and Court-Appointed Mediators do not forbid a mediator from offering opinions. Rules, such as 10.306(c), only prohibit opinions that are “intended to coerce the parties, unduly influence the parties, decide the dispute, or direct a resolution of the case.”

The Committee Notes to the Rule explain the mediator’s ethical use of opinions: “The primary role of the mediator is to facilitate a process which will provide the parties an opportunity to resolve all or part of a dispute by agreement if they choose to do so. A mediator may assist in that endeavor by providing relevant information or helping the parties obtain such information from other sources. A mediator may also raise issues and discuss strengths and weaknesses of positions underlying the dispute. Finally, a mediator may help the parties evaluate resolution options and draft settlement proposals … While mediators may call upon their own qualifications and experience to supply information and options, the parties must be given the opportunity to freely decide upon any agreement. Mediators shall not utilize their opinions to decide any aspect of the dispute or to coerce the parties or their representatives to accept any resolution option.”

A certified mediator is prohibited from providing an impermissible opinion because it would be contrary to the requirement of self-determination. Rule 10.310 clearly states, “Decisions made during a mediation are to be made by the parties. A mediator shall not make substantive decisions for any party. A mediator is responsible for assisting the parties in reaching an informed and voluntary decision while protecting their right of self-determination.”

Such rules, like Rule 10.370(a), do not prohibit permissible opinions, even when they involve substantive points of law, assuming the mediator is qualified by training or experience to provide. For example, in a landlord-tenant matter, a mediator can convey an opinion to the landlord that he failed to timely provide notice to the tenant regarding the retention of the security deposit. Mediator Ethics Advisory Committee (MEAC) Opinion 2019-003 determined the mediator should convey such opinions in caucus and through open-ended questions, such as “how do you prove you are entitled to return of the deposit when there is a statutory notice requirement?” This technique of asking open-ended, but pointed, questions uses opinions to reality test a party’s position.

Other open-ended type questions, such as “what are your best case, worst case, and most likely case outcomes?” is another permissible way to express an opinion. Where a mediator perceives a party’s outcomes to be unrealistic, it may require the mediator to further probe by asking “what is the basis for such outcome or what would the other side contend is inaccurate about your suggested best case outcome?” The mediator should raise these open-ended, opinion driven questions, in caucus to preserve her impartiality.

Another example of the proper use of an opinion, assuming the mediator is qualified, may occur where the parties fail to address an issue, such as in a custody dispute where the parents have not addressed who may claim the child as a tax exemption. The mediator, according to Rule 10.220, may raise this question because it will assist the parties in identifying issues.  In communicating such information, however, the mediator should raise the issue with all parties so that she maintains her impartiality, i.e., the mediator should not direct the parties to a resolution of the issue.  One effective technique multiple opinions have referred to (including MEAC Opinion 2017-011 and 2013-016 MEAC Opinion 2009-007) is to raise an issue that may have been overlooked by the parties is to ask “have you considered all the issues in the pleadings or required by applicable law,” coaxing the parties to the missing issue themselves.

In conclusion, as demonstrated above, the mediator’s expression of personal or professional opinions, primarily through open-ended questions, is an appropriate and ethical technique to assist the parties in resolving their disputes.

Joseph M. Goldstein is a partner in the Fort Lauderdale office of Shutts & Bowen. He is a Florida Supreme Court-certified civil circuit mediator and Florida Bar board-certified in business litigation. Contact him at jgoldstein@shutts.com.