Imagine you arrive at the office feeling a little hungry. Walking up to a machine in the lobby, you pull out your phone and use an app to design your very own smoothie, then watch as fruits combine into a healthy breakfast drink that is ready before the elevator bell rings. As you walk away, the machine hums as it cleans itself.

This automated smoothie vending machine is called the JuiceTower, and it was recently invented by Shutts & Bowen associate Aleksey Shtivelman. 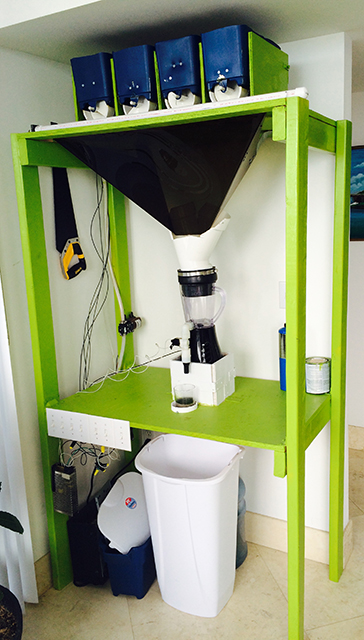 "JuiceTower is about creating a culture of health and fitness, and will solidify this culture by way of the app, through which everyone will be able to create their own smoothies, rate smoothies, see suggested smoothies based on their palate, and be provided with nutrition information about the smoothies consumed that day and week," said Aleksey.

In a market that has generated more than $2.4 billion in 2011 and has doubled since 2007, Aleksey hopes to capitalize on the increased demand from stores like Starbucks, McDonald's and other chains to make smoothies and to make them in a way that reduces costs and reaches more customers.

Aleksey says that it's the only patented device to make automated blended smoothies from frozen food and that it's about a lot more than smoothies.

"JuiceTower is not only a machine, but it stands for the concept of bringing healthy drinks to the hands of our children, friends, family members, and the world," said Aleksey. "It's about creating a culture of drinking smoothies every day, and creating our own smoothies without having to reach into the freezer, and an exciting experience for making healthy drinks, anywhere, at any time."

Read more about how Aleksey was inspired with the idea in this South Florida Business Journal article.

Watch a video demonstration of the JuiceTower prototype here.

Aleksey Shtivelman is an international business attorney in the Miami office of Shutts & Bowen LLP, where he is a member of the firm's International Dispute Resolution Practice Group. Aleksey focuses his practice on counseling companies and individuals doing business across borders. Originally from Odessa, Ukraine, Aleksey is a native Russian speaker and is fluent in Spanish. Read more about Aleksey here.